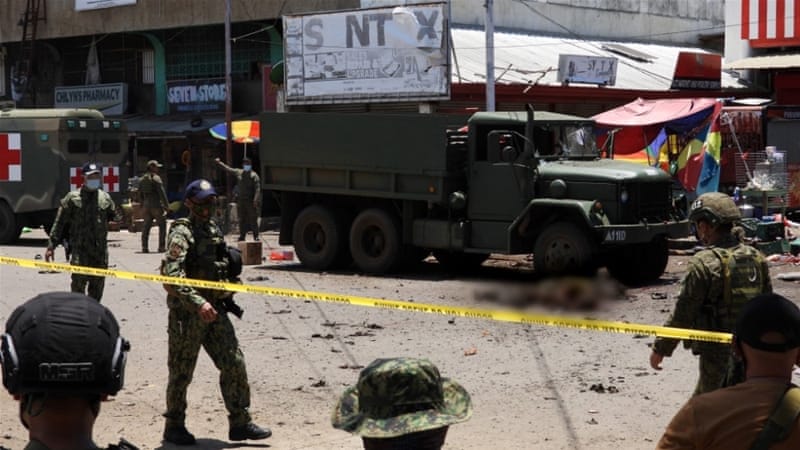 10 Killed In Twin Bombings In Philippines

At least 10 people have lost their lives after two explosions that struck the southern Philippine town of Jolo, earlier today. Wounding several others, one of these explosions has reportedly been carried out by a woman suicide bomber linked to the radical Abu Sayyaf group. At least 17 government troops were injured in the two attacks.

Philippine Red Cross Chief and senator Richard Gordon confirmed the explosion hit at around noon (00:00 EST) on Monday in the capital of Sulu, one of the country’s southernmost provinces. Gordon, said that a motorcycle loaded with improvised explosive devices went off near a military truck. The Red Cross office in Jolo is located near the site of the blast.

The casualties in the first explosion included five soldiers and four civilians. The second explosion came soon afterward, whilst authorities were still cordoning off the area. This explosion which was reportedly carried out by a female suicide bomber took the life of one person. According to a news report, Lieutenant General Corleto Vinluan reported these casualties and added that, if confirmed, this would be the fourth known suicide attack in the country.

The blasts took place near a catholic church, which was where a major explosion claiming 20 lives had been set off last year. The previous attack had come days after a majority-Muslim area in the region voted for greater autonomy in a referendum. The Islamic State (IS) group said it was behind the attack on Jolo island, where jihadist groups are active.

In a statement, Philippine police chief Gen Archie Francisco Gamboa said he has ordered an investigation into the deadly incident, adding that all perpetrators should be held accountable for the crime. Although no one has claimed responsibility for the attacks, Sulu has always been under the stronghold of the Abu Sayyaf Group, an armed outfit that has allied itself with ISIL (ISIS).

Abu Sayyaf has long been crusading for independence in the southern region of Mindanao, claiming it to be a land that belongs to their ancestors since the pre-Spanish colonial period. The group has been a known accomplice to several kidnappings, robberies, and deadly bombings.