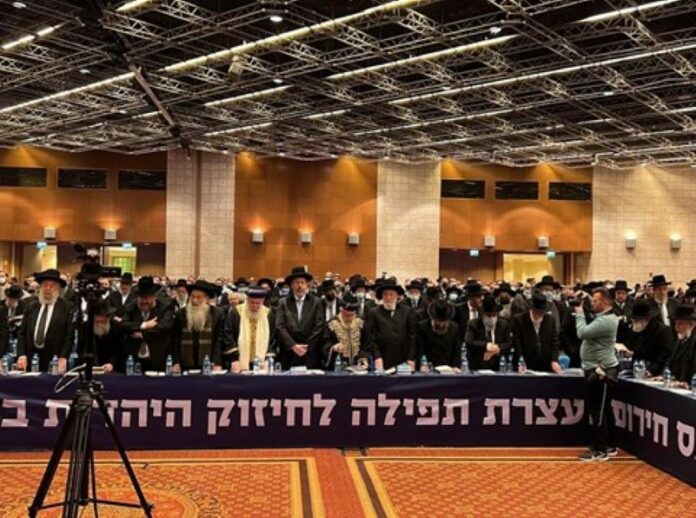 In a massive show of solidarity against Religious Affairs Minister Matan Kahana’s proposed religious reforms, a thousand Rabbanim from all stripes gathered for an emergency Kinos and atzeres tefillah at Binyanei Haumah in Jerusalem on Tuesday evening.

Starting off with the recitation of Tehillim, the protest then featured prominent Rabbis speaking openly against Kahana and his vile plans. HaRav Yosef said in his address, “Religious Affairs Minister, get yourself together already, follow after all the Rabbanei Yisrael. Stop your derech. You ruined kashrus and now you want to ruin giyur? Hashem should help that he does teshuvah.”

Meanwhile, Rosh Yeshivas Ateres Yisrael HaGaon HaRav Baruch Mordechai Ezrachi spoke via teleconference from the US, where he is currently on a chizzuk trip, followed by HaGaon HaRav Yitzchak Ezrachi, one of the Roshei Yeshivos of the Mir, and Bnei Brak Rav HaGaon HaRav Massoud Shimon, who read the letter of the Nasi of the Moetzet Chachmei HaTorah, HaGaon HaRav Shalom Cohen.

HaRav Yisrael Zickerman read the letters of HaGaon HaRav Chaim Kanievsky and HaGaon HaRav Yitzchak Zilberstein, where HaRav Chaim wrote that “it is a mitzvah to fight [against the reforms] as much as possible.”