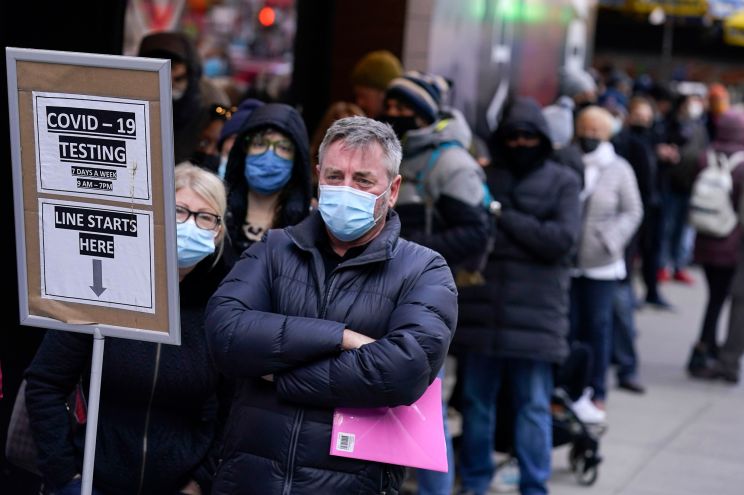 On Wednesday, New York state reported a new single-day high of 67,090 cases, a 64.5% increase in just the last day. The unprecedented total came amid a recent high in the number of daily tests — 362,594 — for a positivity rate of 18.5%/ after 13 new sites were opened up to meet the high testing demand.

New York launched more than a dozen new COVID-19 testing sites Wednesday in almost all 10 regions amid an omicron surge that has generated record cases on a near-daily basis (and record testing) over the last two weeks.

Meanwhile, Gov Kathy Hochul reported 97 new COVID fatalities in New York, the first time in many months daily deaths have neared 100. It tops the most recent reported high by at least 20 lives and is “not the direction we want to go,” Hochul said. Hospitalizations are escalating exponentially, too, rounding out at about 6,767 total statewide as of Wednesday, Hochul said. That’s a 10% increase over Tuesday’s admissions and perilously close to the 2021 highs around 8,700 from January. More than 960 patients are in ICUs, with another 17 added to Wednesday’s count.

In response to this worrying uptick, among the 13 new sites NYC residents can get tested at:

Warning of a further spike in January, Hochul also said Wednesday, “We’re basically preparing for a January surge. We know it’s coming. And we’re naive to think it won’t. We do think there’s going to be a spike in cases that’s going to continue, not just in our positive rates but in our hospitalizations.

Speaking about NYE, she added, “New Year’s Eve is coming. I do hope we can have a healthier next year, but we’re going to be smart. New Yorkers, if we’re anything, we’re tough, we’re tenacious but we’re also smart. We’re going to do the right thing by continuing to share the message of getting vaccinated, getting children vaccinated, getting the booster shots, wearing the mask, and I know I sound like a broken record but I’m going to keep repeating it because we need to remind people that this is the way out of this. We’re not as vulnerable as we were this time last year.”