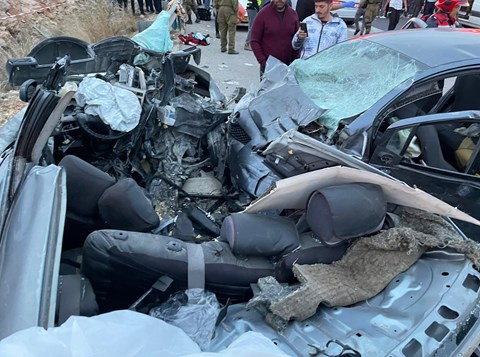 Two young children died and their parents were seriously injured in a deadly road accident that occurred a short time before Shabbat on road 465 in Samaria.

The local police identified the dead children as three-year-old Tov-Roi Meoded who died instantly and her sister Haleli,6 who died after Shabbat.

The parents of the children Yaniv ben Ahuva and Hodaya bat Esther were hospitalized in Beilinson hospital in very grave condition.

It was learned that Hodaya was pregnant but her fetus did not survive the collision.

In the initial police investigation, the family was traveling from the community of Bruchin westwards towards Modiin Illit when a Palestinian car crossed a double white line and the family’s car crashed into it.

The traffic investigators said that the Palestinian car made an illegal u-turn and crossed a white line and a car coming from the opposite direction collided with it.

The car had been officially taken off the road and designated for scrap.

It was further learned that the two occupants of the Palestinian car were also killed in the accident.