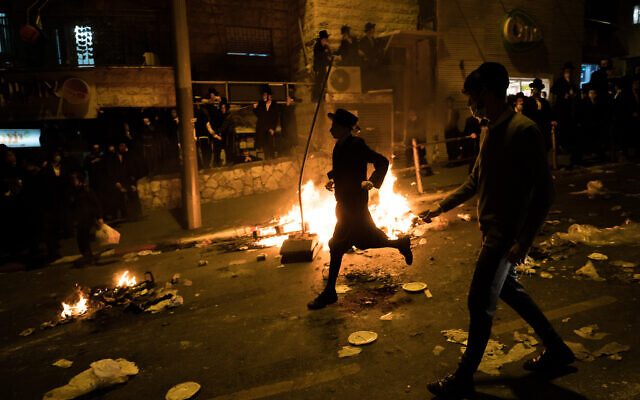 25 Arrested As Thousands of Orthodox Protesters Rally in Jerusalem

On Monday evening, hundreds of thousands of Ultra-Orthodox Jewish protesters took to the streets in condemnation of the planned route of the city’s light rail through their neighborhoods. As the demonstrations got unruly, 25 people were detained by officials who tried to simmer the heated situation.

Approximately 4,000 ultra-Orthodox protesters gathered last night at the Bar Ilan junction in Jerusalem, to protest plans to extend the light rail’s route through their neighborhoods. The light rail’s green line is expected to go through Bar Ilan street, which some residents fear may harm the bus services in the area and bring “immodest behavior” to the Orthodox neighborhood, which is primarily why they are against the proposed new plan. It is being argued by authorities that the light rails have benefited from expedited infrastructure work around the city, taking advantage of the fact that traffic was reduced during coronavirus lockdowns.

On Monday night, the demonstrators started by blocking the main junction in Jerusalem, after which some of them knocked over fences surrounding the light rail construction site and setting city work vehicles and dumpsters on fire. As cops tried to pacify the situation, 25 protesters were detained for disorderly conduct as protesters confronted local police, and hurled insults at them. According to Israel Police, a pocket knife, a club, and a pepper spray canister were seized from one of the detained protesters. Orderlies used water cannons and horse-mounted officers to try and disperse the demonstrators.

As it stands, Jerusalem’s only current operating light rail line was inaugurated in 2011 and runs along Jaffa Street in the heart of the city. Four additional lines are planned, but their routes have drawn protests from residents of several neighborhoods, as residents feel that the line would unnecessarily commercialize the locality and bring in immodest elements to the vicinity.