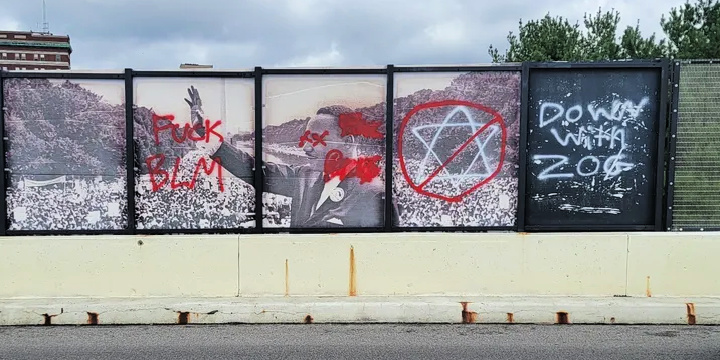 Three incidents targetting the Jewish community in Alliance, Ohio, are being investigated by the police. All three incidents involve racist vandalism and antisemitic graffiti, possibly crafted by the same perps.

In all three cases, a Star of David was seen crossed out in a red circle. These were spotted on the front of the YWCA building on E. Market St and upon another building on S. Webb Ave. The third incident involved the words “F*** BLM” (Black Lives Matter) sprayed along Dr. Martin Luther King Jr. Viaduct, which features a series of photographic panels honoring the late US civil rights leader. Alongside that slogan was another that read “Down with ZOG” (an acronym that stands for “Zionist Occupation Government) accompanied by the same crossed-out Star of David.

Local Rabbi David Komerofsky of Temple Israel said that the vandalism was intended to “terrorize people.” He emphasized that the Jewish community should “remain vigilant and not be intimidated or frightened by such actions.”

No arrests have been made in relation to these incidents, but the local police believe that this may be the work of juveniles. “They believe it very well could be kids messing around,” said Sgt. Michael Yarian of the Alliance police department who also stated that a witness reported seeing two individuals in the area around the time of the incidents.