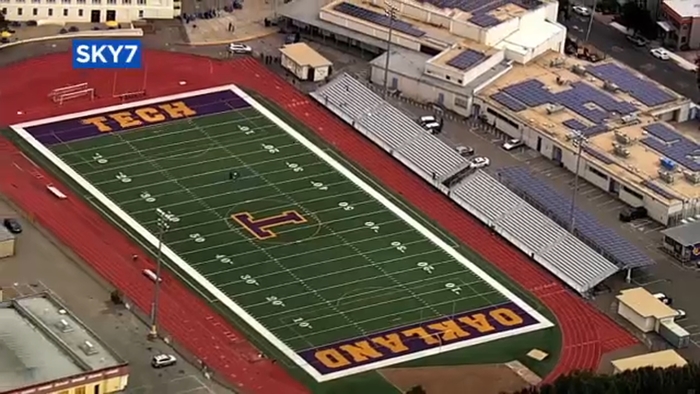 On Sunday, three people were shot during a youth football game at a high school in California. One of those shot included a 6-year-old girl.

The three victims which also included a 30-year-old man, and a 52-year-old woman were all struck by gunfire when shots rang out in the stands of a football field at Oakland Technical High School just before 1:20 p.m.

The incident occurred amidst several hundred people who were watching a football game between a Fresno area team and an Oakland team in the 10-year-old youth league when the bullets flew.

EMS responded to the scene and rushed the 30-year-old man to an area hospital for two gunshot wounds to his feet and lower torso. Meanwhile, the 6-year-old girl, whose family ran her to a nearby home to call an ambulance, was also shot and rushed to a hospital in stable condition, police later learned.

A few hours later, around 3 p.m., the 52-year-woman who suffered a gunshot wound to her leg during the same shooting, walked into a third hospital.

Reacting to the incident was one of the team’s coach Quintrell Dotson, who said, “It’s just sad that I heard these kids running and screaming, and you know when you see these kids’ faces and how they react to things like that it makes it even worse. Kids don’t deserve to be seeing and witnessing things like this, kids don’t need to be around like this once you come to these events, whatever on the outside nature shouldn’t even be going on here so it just hurts that this happened today.”

As of early Monday, police were still in search of the shooter.