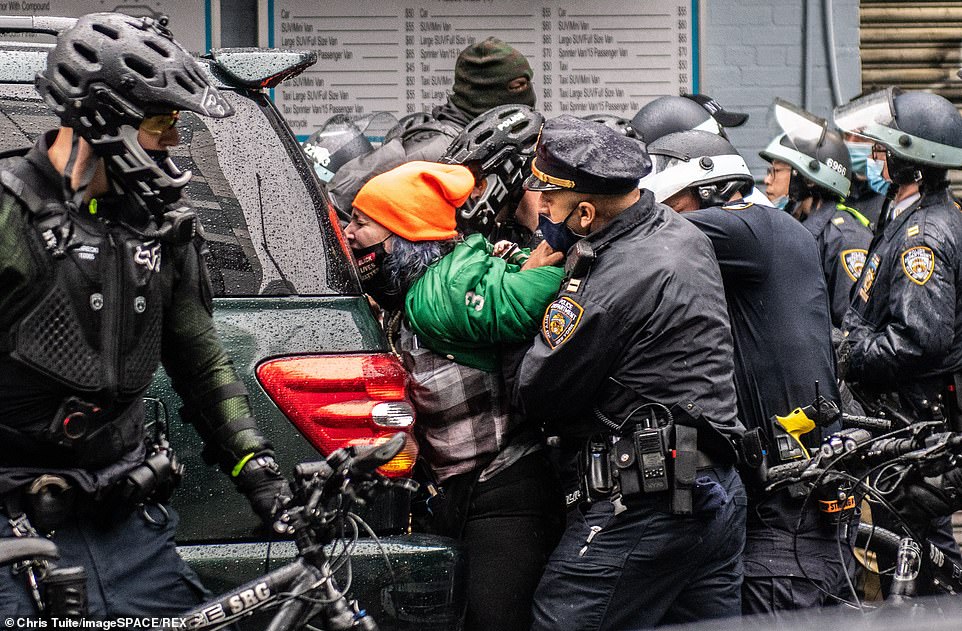 Eleven protesters were arrested at an anti-Trump demonstration in Manhattan on Sunday, amidst surmounting tensions leading up to the elections. With more NYPD officials deployed at the moment, yesterday’s Manhattan protests were dealt with by a dozen cops in riot gear.

As seen in a tweet by the New York Post, clashes broke out between the police and anti-Trump demonstrators near High Line Park in the Chelsea neighborhood in Manhattan.

According to various tweets, protesters were angered by the arrests of a reporter, whose press credentials haven’t been verified until now, as stated by an NYPD spokesperson. The two journalists arrested at the scene including one who was seen wearing two cameras and carrying an umbrella was tackled to the ground as she walked onto the sidewalk after being ordered from the street. A second journalist wearing a press identification from a foreign country was nabbed after he stepped off the curb nearby.

The NYPD later claimed on Twitter that the reports of journalist arrests were false, as the pair of reporters apparently lacked official, NYPD-issued police credentials. Eight other people were arrested for various offenses. Five were issued summonses for disorderly conduct, three were charged with disorderly conduct or obstruction and released, and one was charged with obstruction and resisting arrest. Two others were in custody but charges were pending.

It is being reported on social media that earlier today members of the press were arrested during a protest in Manhattan.

These reports are false.

All arrested individuals from today's protests have been verified to not be NYPD credentialed members of the press.” pic.twitter.com/Xbxhk1FK79

The NY Post reported that several protesters kept hurling expletives at the police, with one particular demonstrator saying, “It’s f–king New York City. There are people getting f–king raped and murdered. Go fight real crime, you f—— pathetic p——.” “You tell people to get on the f–king sidewalk, then you push us off the fucking sidewalk,” another says. “This is America, right?”

According to a few organizers of the protest, the motive behind the demonstrations was to block MAGA caravans. A whopping 300 anti-Trump demonstrators had gathered at Madison Square Park to confront pro-Trump caravans cruising through the New York region ahead of Tuesday’s presidential election. The anti-Trump group marched to the West Side Highway and ended the demonstrations there, rightly predicting that the Trump caravans were avoiding Manhattan.