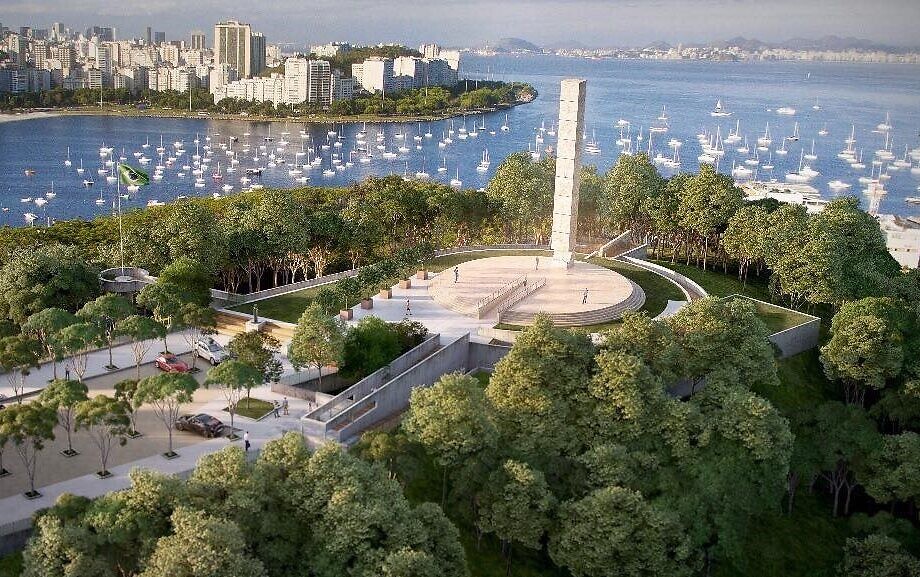 On Monday, Rio de Janeiro inaugurated a long-awaited, 72-foot-tall tower that is to serve as a Holocaust memorial in the presence of numerous Brazillian and Jewish dignitaries.

Overlooking the Sugarloaf Mountain, one of South America’s most famous landmarks, the new Holocaust Memorial was inaugurated in Rio, as an homage to all the lives that had been lost during the darkest times in Jewish history. The memorial’s tower is divided into 10 parts, representing the Ten Commandments. At its base, the sentence “Thou shalt not kill” is written. A large underground space houses a high-tech interactive exhibition area.

The memorial is located at the peak of the Yitzhak Rabin park, which was inaugurated by the widow of Israel’s murdered prime minister, Leah Rabin, in 1996. Erected with the help of private fundings, the memorial was conceptualized by late Rio city council member Gerson Bergher, whose widow, and now council member Teresa Bergher, attended the inauguration.

Present at the event, and representing President Jair Bolsonaro, Brazil’s Secretary of Communications Fabio Wajngarten, who is of Jewish descent, said, “I am a grandson of Holocaust survivors. My grandmother had a number tattooed on her arm and what she told me I will never forget. We cannot forget the atrocities of the Holocaust.”

During the event, Brazil’s Supreme Court president, Judge Luiz Fux (a Rio-born grandson of Romanian Jewish refugees), stressed that one cannot remain indifferent to the pain of others and quoted Holocaust survivor Elie Wiesel, saying “Indifference is the greatest danger for humankind. All of this was due to indifference. Not remembering the Holocaust means killing these people again.”

Stressing upon the educational angle of the memorial, Bergher said, “Our intention is that public schools can make constant visits to the memorial so that students of the municipal and state network will know better what the Holocaust and the Nazi regime were.” Now that it has been inaugurated, the memorial is expected to host national and international exhibitions with themes including defense of human rights, tolerance, and humanism.

Israeli Prime Minister Benjamin Netanyahu sent a recorded video message that played at the event, in which he said, “It’s my hope that this new memorial will serve to strengthen awareness of the Holocaust to this generation and for generations to come.”