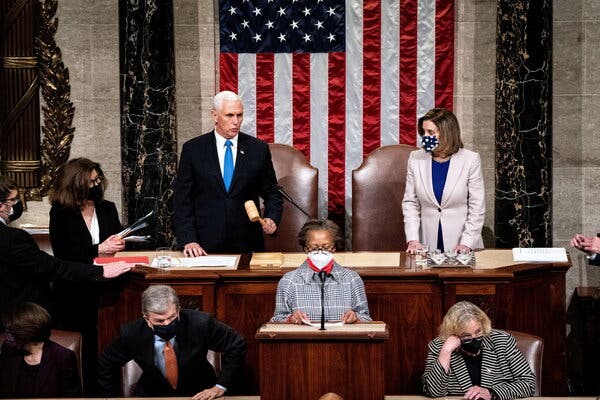 A Night of Resignation, Condemnation, and Reconvening of The Congress: Leading Up To Biden’s Presidential Victory

After a day’s worth of raging protests, the Congress reconvened on Wednesday night to continue their review of Electoral College votes that will further go on to cement President-Elect Joe Biden’s victory over President Trump.

Earlier yesterday, authorities had evacuated lawmakers and the D.C. mayor declared a 6 p.m. curfew amid escalating violence in the halls of Congress that saw police draw their weapons. Reports also stated that the curfew will extend until President Trump is in office (until January 20th). Meanwhile, the President has since called for “peace” and for protesters to “go home.”

Starting with Georgia Sen. Kelly Loeffler conceding the Georgia run-offs, the prominent Trump ally said on the Senate floor that she no longer plans to object to the certification of the Electoral College vote in her home state of Georgia. The decision came just one day after Loeffler lost her re-election challenge to Democratic Senator-elect Raphael Warnock and two days after Trump held a rally on her behalf. “I cannot now, in good conscience, object to the certification of these electors,” Loeffler said.

Amidst the first of the elections came as Deputy White House Press Secretary Sarah Matthews resigned, saying, “I was honored to serve in the Trump administration and proud of the policies we enacted. As someone who worked in the halls of Congress, I was deeply disturbed by what I saw today. I’ll be stepping down from my role, effective immediately. Our nation needs a peaceful transfer of power.”

East Wing Chief of Staff Stephanie Grisham and Social Secretary Rickie Niceta also submitted their resignations in response to the violent riots that took place. In her statement on Twitter, Grisham said, “It has been an honor to serve the country in the @WhiteHouse. I am very proud to have been a part of the @FLOTUS @MELANIATRUMP mission to help children everywhere, & proud of the many accomplishments of this Administration. Signing off now – you can find me at @OMGrisham.”

The White House could not be immediately reached for comment on the three women’s abrupt resignations. First lady, Melania Trump, has yet to publicly comment on losing Grisham, who served as her chief of staff. Grisham had also previously served as White Hosue press secretary.

After an assurance that came from Vice President Mike Pence, declaring that the “violence is quelled” and the “Capitol is secure”, the Senate went into session. “Let’s get back to work,” Pence added.

In his opening speech, Senate Majority Leader Mitch McConnell said violent protestors “failed” to “disrupt democracy”. McConnell opened the resumed Senate session with a speech addressing the day’s events. The Kentucky senator said Congress will “certify the winner of the 2020 presidential election. The United States and the United States Congress have faced down much greater threats than the unhinged crowd we saw today,” McConnell said. “We’ve never been deterred before and we’ll not be deterred today.”

Next up, in the early hours of Thursday, the Senate rejected Pennsylvania’s election result challenge, approving the Pennsylvania electoral vote, 92-7. In the end, the U.S. Congress early Thursday certified the Electoral College vote that gave Democrat Joe Biden his presidential victory.