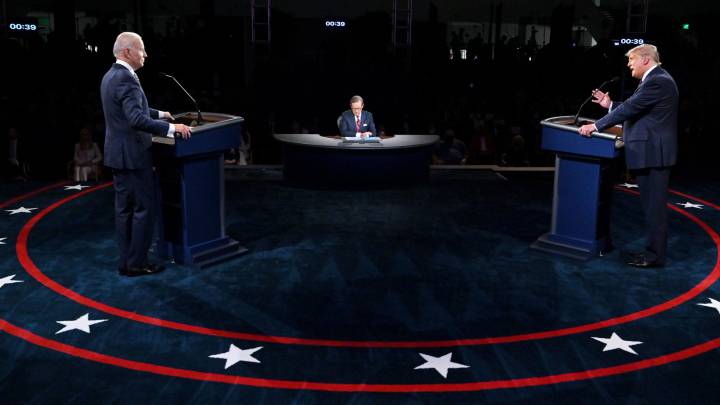 A Thorny 90-Minute Face-off: Highlights of the 1st Presidential Debate

Staged at a makeshift debate hall in Cleveland, with a controlled crowd of under 100 people due to the coronavirus safety restrictions, the much-awaited 1st Presidential debate had Americans glued to their TV sets and devices. After competing with each other for over a year, President Donald Trump and Democratic presidential candidate Joe Biden took to a heated 90-minute face-off that was moderated by Chris Wallace.

The Key highlights of the debate include:

President Trump Being Admonished For Interrupting

After repeatedly overpowering his opponent, President Trump was asked by Wallace to make fewer interruptions, to which Biden shot down the President saying, “Will You Shut Up, Man?”. “I think that the country would be better served if we allowed both people to speak with fewer interruptions. I’m appealing to you, sir, to do that,” Wallace said.

When asked about the condemn white supremacists and militia groups posing a threat to the country, as stated by the FBI, President Trump highlighted the misdemeanor of the left-wing protesters who were causing more damage to the system and the country. Claiming that he would do anything to maintain peace in the country, President Trump said, “This is not a right-wing problem. This is left-wing.”

Biden argued against Trump’s claim that he has done more than any president, save for President Abraham Lincoln, for the Black community, by criticizing that the coronavirus disproportionately kills Black Americans.

President Trump later pointed out towards Biden’s support of the 1990 crime bill, saying Biden referred to Black Americans as “super predators.” He also criticized Biden’s lack of support from police officers and sheriffs, while drawing attention to the fact that his response to protests and riots, particularly sending in federal troops to Portland, Oregon was the most befitting.

Taking a strong stand for himself, President Trump braced himself as Wallace asked him what he paid in federal income taxes in 2016 and 2017, after the New York Times reported that his tax returns showed only a $750 payment in each year.

Voicing out his stance on the matter, the President said he had paid, “millions of dollars. And you’ll get to see it,” despite his refusal to release any returns since he became a candidate in 2015.

Biden criticized Trump for downplaying the virus at the start of the outbreak, despite audio recordings showing the president understood its danger. Touting the apropos handling of the crisis by him and his administration, the President said, “You could never have done the job we did.” He followed up criticizing the Obama administration, which Biden served as the Vice President, about the number of deaths from swine flu, which Biden said was far fewer deaths than COVID-19.

Biden said the seat of the late liberal Justice Ruth Bader Ginsburg should be filled after the election when it was clear who the president would be. To this, the President claimed it was the Republican party’s right to select the contender since they are the ruling party in the nation as of now.

“I will tell you very simply we won the election, elections have consequences. We have the Senate and we have the White House and we have a phenomenal nominee respected by all,” Trump said in defense of his nominee, conservative Judge Amy Coney Barrett.