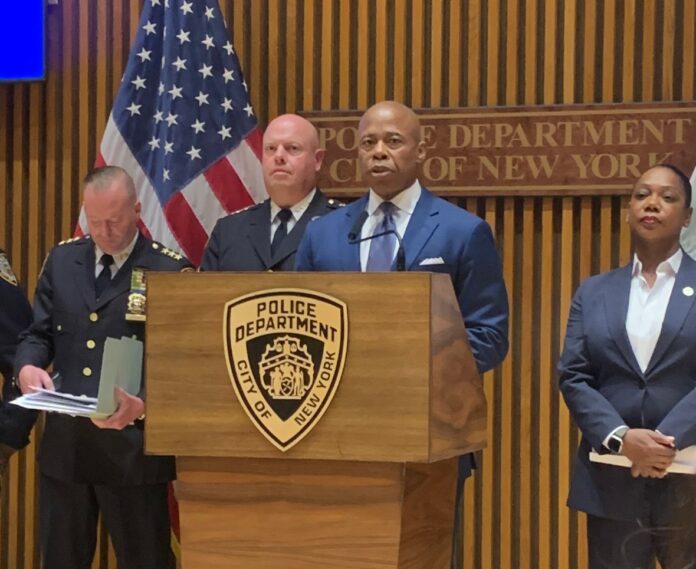 Calling the new bail reform laws the “definition of insanity”, New York Mayor Eric Adams and NYPD Chief Keechant Sewell, along with other NYPD brass joined Wednesday night to blast the state’s laws in the wake of multiple high-profile attacks against police and the public.

Calling the bail reform laws dangerous and harmful to the sheer fabric of the city, Adams said, “They say the definition of insanity is to do the same thing repeatedly but expect different results. Our criminal justice system is insane.”

NYPD Commissioner Sewell added, “This is about recidivists who cause New Yorkers to suffer needlessly. Every day, as hardworking New Yorkers start their day or night of work or school, or to simply enjoy what this city has to offer, recidivist criminals are planning or taking the opportunity to commit their next larceny, robbery, burglary or other crime. Their efforts are increasingly aided by the fact that after the NYPD has arrested them, the criminal justice system fails to hold them appropriately accountable for their actions. These offenders face very few, if any, repercussions, despite committing crime after crime.”

“Your NYPD officers speak to these victims. We support them and proudly go to work for them with every resource we have,” she continued. “But for too many of these victims, justice is elusive. Justice and fairness go hand in hand. Public service has to work together on behalf of all of the people we serve.”

Sharing relevant statistics that point toward the fact that NYPD arrests increased 24% so far in 2022 compared to last year,  with 109,000 arrests this year compared to the 87,794 arrests last year at this time- Adams said he is not waging “a battle against those who saw the need to reform a criminal justice system,” but rather one “against those who are exploiting those reforms,” noting that there are “four components of the criminal justice process: police, judges, prosecutors, lawmakers” who must “operate in unison.”