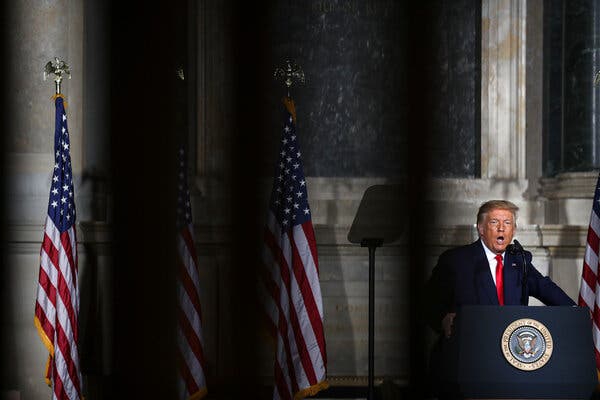 Speaking at the White House Conference on American History at the National Archives Museum in Washington on Thursday, President Donald Trump blamed schools and the educational syllabus of teaching students “hateful lies about this country”.

Vocal about taking all the necessary steps towards “restoring patriotic education”, he claimed that students must be taught to love their country with all their heart.

In his speech, the President also stated that he plans to sign an executive order to create a “national commission to support patriotic education”. Known to be titled as the ‘1776 Commission’, he also claimed that he was invested in directing funding to create a patriotic curriculum for schools.

Under the backdrop of the current protests on racial injustice that have spread across the nation, the President claimed that anti-racism teachings that are forced upon students are as good as ‘child abuse’. He further said, “Our youth will be taught to love America with all of their heart and all of their souls.”

Unclear as to when the order will be signed, or whether it is already underway, the Office of Management and Budget issued a directive earlier this month, prohibiting departments from using federal funds to administer diversity training that incorporates teachings about the race theory and white privilege.

In a gross mention of the Pulitzer Prize-winning 1619 Project, which was an initiative that focused on the “consequences of slavery and the contributions of black Americans at the very center of the story we tell ourselves about who we are as a country, Trump also threatened to cut off funding for schools that teach it.

Moving forward with his deep-rooted sentiment of patriotism, the President said that the framing of history around race was “toxic propaganda” and “a form of child abuse in the truest sense of those words” — specifically calling out critical race theory, a concept that was started around the idea that the law and legal institutions are inherently racist. He accused Democrats of pushing education that makes students feel “ashamed” of America’s rich history and heritage.