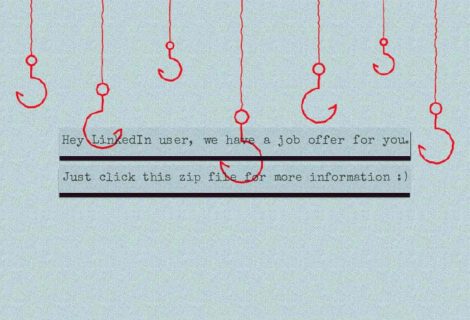 Sneaking in malware with fake jobs posted on LinkedIn, about an estimated 500 Million accounts have been breached, according to a report by CyberNews.

In a purported sample of two million of the profiles for sale, LinkedIn members’ full names, email addresses, phone numbers, genders, and more were visible, CyberNews found. LinkedIn, however, says in an official statement, that the data includes information from many places and wasn’t all scraped from the professional-focused social network.“NO PRIVATE MEMBER ACCOUNT DATA FROM LINKEDIN WAS INCLUDED. We have investigated an alleged set of LinkedIn data that has been posted for sale and have determined that it is actually an aggregation of data from a number of websites and companies,” reads LinkedIn’s statement.

Meanwhile, according to the news reports by Indian tech portals, cybercriminals are hiding malware in fake LinkedIn job offers, according to a new report by security firm eSentire. The company’s threat response unit (TRU) has discovered that hackers are hiding malicious zip files in fake job offers on the professional social media platform, in a new form of a spearphishing attack.

The LinkedIn statement also contends, “We have investigated an alleged set of LinkedIn data that has been posted for sale and have determined that it is actually an aggregation of data from a number of websites and companies. It does include publicly viewable member profile data that appears to have been scraped from LinkedIn. This was not a LinkedIn data breach, and no private member account data from LinkedIn was included in what we’ve been able to review.”

Meanwhile, an Italian watchdog said in a statement late on Thursday that it started an investigation following “the dissemination of user data, including IDs, full names, email addresses, telephone numbers.” The regulator warned that anyone getting hold of such data and using it could face sanctions. It said Italy has one of the highest numbers of subscribers to LinkedIn in Europe and called on affected users to “pay particular attention to any anomalies” related to their phone number and their account.