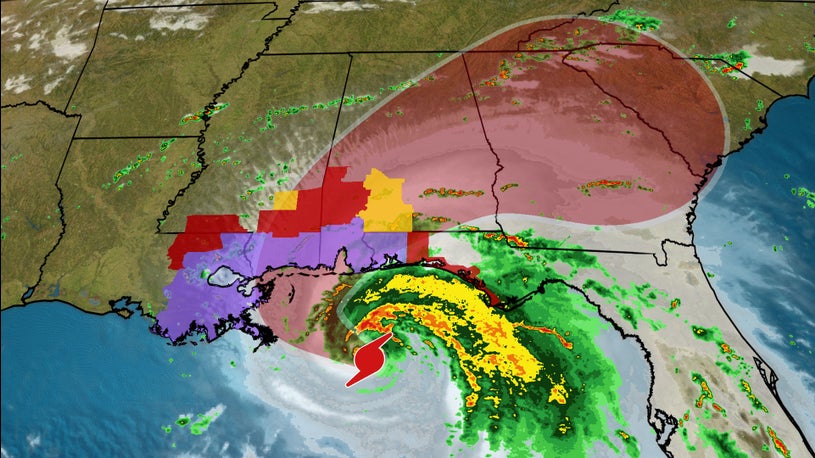 Just about three weeks after bracing the destructive Hurricane Laura, the Gulf Coast is facing another adversity with the potentially violent, Category 2 Hurricane Sally. Headed towards Louisiana and Florida, the storm is set to bring, heavy rain, howling winds, and a dangerous surge that can invite a lot of damage.

After facing the wrath of Laura, The National Hurricane Center has claimed that Sally is likely to bring “life-threatening storm surge, hurricane-force winds, and flash flooding” along the Gulf Coast. The storm is forecast to make landfall in southern Mississippi or southern Alabama late Tuesday or early Wednesday as a “Category 2” hurricane with winds of up to 110 mph.

Although the Hurricane Center said it was too early to determine where Sally’s center would move onshore, numerous families have been evacuated and hurricane warnings are in effect from Morgan City, Louisiana, to Navarre, Florida, including New Orleans. It is also being speculated that the storm could bring around 8 to 16 inches of rain, and some areas could see up to two feet. The Hurricane Center has also relayed that the storm might lead to life-threatening flash floods, and rainfall will likely lead to widespread minor to major flooding on area rivers.

Commenting on this unfortunate natural calamity, Louisiana Governor John Bel Edwards said, “I know for a lot of people, this storm seemed to come out of nowhere. We need everybody to pay attention to this storm. Let’s take this one seriously.”

Edwards further warned people to prepare for the storm immediately. Currently, Louisiana is sheltering about 13,000 Hurricane Laura evacuees, at most numerous hotels across New Orleans, which happens to be on the potential path of Sally. Commenting on this concern, Edwards assured, “New Orleans is better prepared for a hurricane than she’s ever been before, but if you get 18 inches of water in 10 hours, I think Aspen, Colorado, would probably flood. So I’m concerned, but not paralyzed by it.”

The seventh hurricane of the season, Sally has arrived at a time when Hurricane Laura has caused widespread desecration to life and property. As of now, more than 82,000 people remain without power in Lake Charles and southwestern Louisiana, and more than 210,000 households don’t have clean drinking water.

Lending a feeling of assurance, President Trump took to Twitter on Monday night, saying he was “closely monitoring” the hurricane and “fully engaged” with state and local leaders to assist “the great people of Alabama, Louisiana, and Mississippi.”

My team and I are closely monitoring extremely dangerous Hurricane Sally. We are fully engaged with State & Local Leaders to assist the great people of Alabama, Louisiana, and Mississippi. Be ready and listen to State and Local Leaders! @GovernorKayIvey @LouisianaGov @TateReeves