Seeking justice against the unwarranted restrictions on religious institutions and festivities across predominantly Jewish neighborhoods in New York City, Agudath Israel, is challenging Gov. Cuomo’s orders in the Supreme Court. The Orthodox group is in the hopes of being granted some respite by the new conservative majority.

On Wednesday, in an email floated by Agudath Israel- an umbrella organization representing Haredi Orthodox Jews- it was deduced that the group will now be challenging New York Gov. Andrew Cuomo’s limitations on houses of worship in “red zones,” areas including Brooklyn and Queens, with high COVID test positivity rates.

With the selection of Justice Amy Coney Barrett, the group hopes to gain an upper hand with the hearing, given her conservative background. Advocates representing the group expect the SCOTUS to determine the case in ways that might have been unlikely before her confirmation.“Given the new make-up of the court, the plaintiffs think there are now enough justices interested in issuing emergency relief and providing broader constitutional guidance on what government is prohibited from doing even in the midst of a global pandemic,” Michael Helfand, associate dean for faculty and research at Pepperdine University’s Caruso School of Law, said in an email.

Alleging religious discrimination, the lawsuit comes after a barrage of similar cases this year, since the onset of the pandemic. Earlier on, three Orthodox men had sued New York officials over limitations on attendance at synagogue services that were imposed at the beginning of the pandemic, arguing that restrictions should not be stricter for houses of worship than for other gathering places, like businesses. The judge, in that case, blocked the state from enforcing the stricter rules on houses of worship. 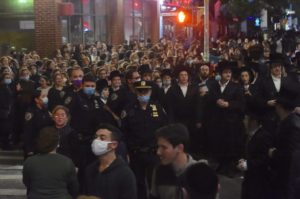 Despite staging protests and voicing out their struggles, the Orthodox community was not given any relief- in fact, they were subject to a lot more scrutiny in the way they were following guidelines. After the protest last month, a federal judge ruled against Agudath Israel’s request for an injunction against the red zone restrictions, saying the restrictions did not violate religious liberties.

Making a strong case, Avrohom Weinstock, Agudath Israel’s chief of staff, said, “While we continue to emphasize safety in our communities, the government cannot, under the guise of health, be allowed to have one set of rules for religious activities and another rulebook for secular activities.” 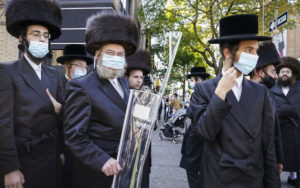 The argument behind this statement was evident recently when thousands swarmed across New York in celebration of Joe Biden’s victory.  This being said, Agudath Israel has also claimed that Cuomo did not provide specific numbers related to the surge in COVID rates in the communities or scientific justification for the restrictions. The group has also alleged that some non-Jewish areas with higher positivity rates were not subject to the same restrictions.