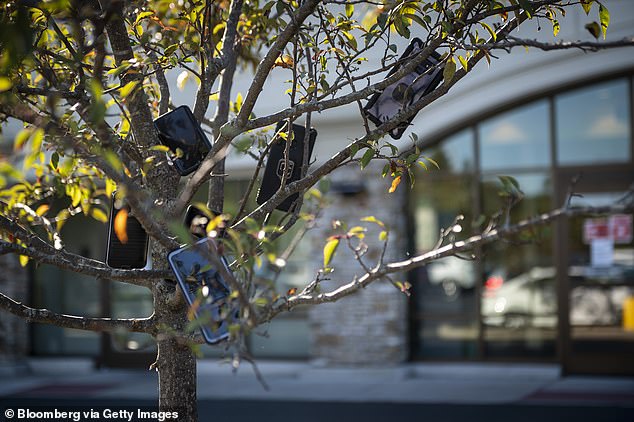 According to a bizarre new Bloomberg report, Amazon drivers in the US are now resorting to hanging phones on trees outside Whole Foods Stores and popular delivery stations, in order to grab more online orders fast.

The Bloomberg report has narrated that someone places several devices in a tree located close to the station where deliveries originate. Drivers in on the plot then sync their own phones with the ones in the tree and wait nearby for an order pickup. The reason for the odd placement, according to experts and people with direct knowledge of Amazon’s operations, is to take advantage of the handsets’ proximity to the station, combined with software that constantly monitors Amazon’s dispatch network, to get a split-second jump on competing drivers.

This new system has sprouted due to the exceeding competition that drivers are facing, with the coronavirus pandemic making things even worse, as far as the economy is concerned. The hanging of these smartphones is giving drivers a chance at getting a delivery route before anyone else, in a scenario where its the survival of the fittest.

Over the past few months, drivers have been using digital media platforms to try and figure out ways in which the tech can be rigged to their advantage. Some have also complained to Amazon that unscrupulous drivers have found unfair means of staying ahead in the competition.

Seeking input from Amazon employees, Bloomberg was told by spokespersons that the company is investigating the matter and that it has no comments as of now. Bloomberg also reviewed photos and videos of smartphones in trees outside Whole Foods and Amazon delivery stations. These footages show drivers approaching the phones and syncing them with their own devices, then sitting or standing nearby waiting for an alert about a route.

The gig workers have been severely hit by the curbs on movement, as fewer people are opting for ride-hailing services due to the fear of transmission of the coronavirus. This is why more drivers have to deliver online shopping orders to make money. As a result, some Whole Foods locations have come to resemble carparks at Home Depot, where day laborers await pickups for home repair gigs.