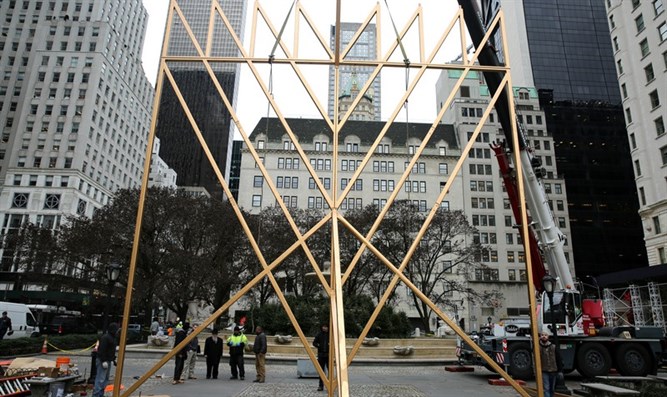 On Thursday night, the first of the Canukkah candle rituals were begun at the largest standing Menorah in Manhattan, complete with all COVID-19 safety protocols as mandated by the State. The annual Menorah lighting ceremony is being followed with the same zest, despite the uneventful set of criticisms faced by the Orthodox community this year.

Standing at a colossal 32-feet-tall and weighing about 4,000 pounds, the ceremony on Thursday, started at 5:30 p.m. at Manhattan’s Grand Army Plaza outside the southeast corner of Central Park in celebration of the first night of the festival of lights. The event was organized by The Lubavitch Youth Organization, and this year the menorah was outfitted with new LED lights up and down the frame to honor the more than 27,000 New York victims who died as a result of COVID-19.

Traditionally on each day of the eight nights of Canukkah, a candle is added to the menorah after sundown and the ninth candle known as the shamash or helper is used to light the other candles. The seven-branched menorah is one of the most recognized symbols of Judaism.

The event, which was live-streamed on Thursday, featured mask requirements and social distancing protocols that were in place for the few dozen attendees of the event. “The idea of Canukkah is to shine and to celebrate the freedoms and the light over darkness and this is a very difficult time for everyone and we need thoseCanukkah lights to brighten up the world now more than ever,” Chabad Rabbi Motti Seligson said before the event. “Because of where [the menorah is] placed it’s an opportunity for families to drive by at any time during Canukkah and really be inspired or meditate or think about the message of Canukkah,” he added.

Meanwhile, at Brooklyn’s Grand Army Plaza, the ceremony to light the borough’s largest menorah began at 5 p.m. Roughly 100 people attended the lighting which was organized by the Chabad of Park Slope. All attendees were seen wearing masks and practiced social distancing.

Complying with all restrictions laid by the State, both organizers signed COVID-19 safety affidavits in order to hold the menorah lightings, and Mayor Bill de Blasio’s spokesperson Mitch Schwartz stated that “the groups holding the permits [were] responsible for keeping everyone safe.” During the course of the event, Rabbi Simon Hecht reminded attendees to “please keep on your masks and keep social distancing.”