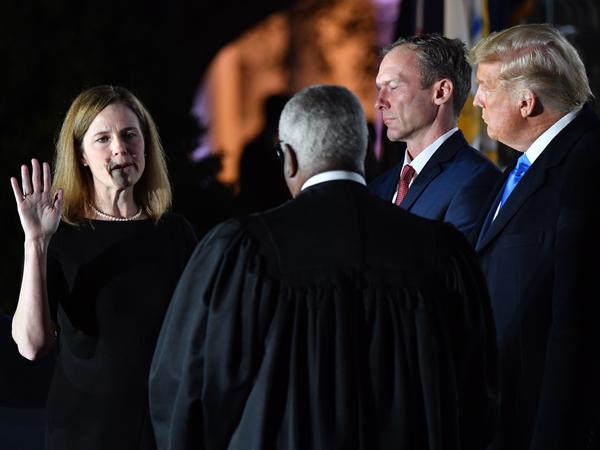 After a sweeping win at the Senate confirmation, Amy Coney Barrett has sworn in as the Supreme Court Justice with a constitutional oath that she took at the White House last night. Justice Clarence Thomas administered the constitutional oath at the ceremony.

In a major victory for the Republicans, just a week before the presidential elections, Justice Barrett will now be at the forefront of the nation’s judicial system as an associate justice on the country’s highest court. As was rightly speculated on Monday morning, Barrett won the Senate confirmation with a majority vote of 52-48. All 45 Democrats, along with two independents opposed her confirmation.

In her address, she stressed the fact that the judiciary and legislature are two separate, independent entities, and they must remain that way for true justice to be served. “A judge declares independence not only from Congress and the president but also from the private beliefs that might otherwise move her,” she said.

Republicans do this because they don’t believe Dems have the stones to play hardball like they do. And for a long time they’ve been correct. But do not let them bully the public into thinking their bulldozing is normal but a response isn’t. There is a legal process for expansion.

Almost as soon as Barrett was confirmed, a swathe of Democrats and their supporters took to social media platforms in a bid to ‘expand the court’. With no comments from Joe Biden after the constitutional oath, On Monday, Biden said that he might be open to shifting Supreme Court justices to lower courts if elected president, noting that he hadn’t made any judgment yet on the issue. Talking to Fox News at a campaign stop in Chester, PA., the presidential candidate claimed, “There is some literature among constitutional scholars about the possibility of going from one court to another court, not just always staying the whole time in the Supreme Court but I have made no judgment.”

The Supreme Court said in a press release yesterday, that Barrett will be able to start her new role after Chief Justice John Roberts administers her judicial oath today.