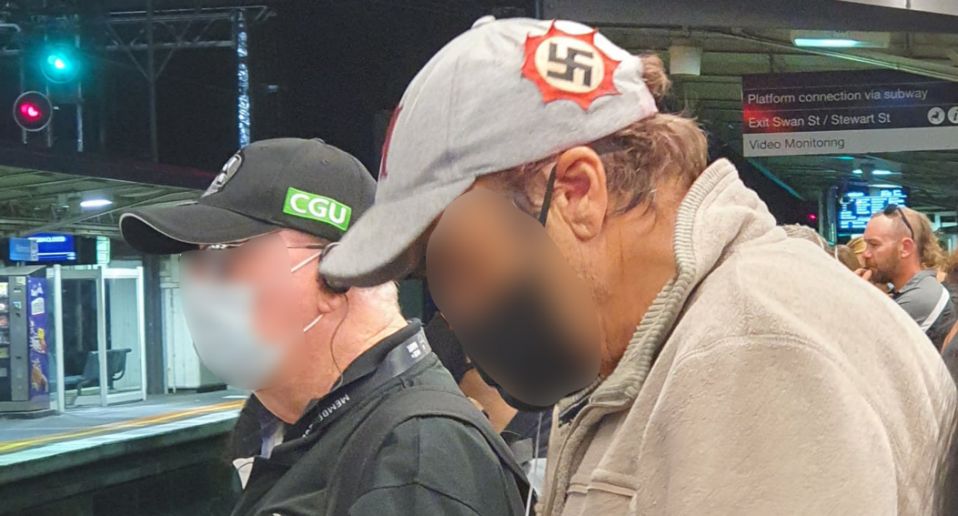 Displaying an open sentiment of anti-semitism, a man was photographed wearing a Nazi Swastika symbol on his cap in Melbourne, Australia. Infuriated by the display, numerous Australian Jewish organizations expressed their disgust and anger over the incident.

Taking a picture of the Nazi-hat-wearing man from Melbourne wasn’t an easy task for a 23-year-old Jewish man, who is a descendant of Holocaust victims. The Swastika was and continues to be a vicious symbol of hate which was used by Hitler to represent his spiteful ideology.  A potent symbol intended to elicit pride among Aryans during the time, the swastika still strikes terror into Jews and others deemed enemies of Nazi Germany.

The Swastika has been banned in numerous countries including Germany, and the Anti-Defamation Commission in Australia is rallying to ban the swastika by law in the land down under, as well. A parliamentary committee from the state of Victoria issued a report this month recommending such a ban, and the government appears to be leaning toward enacting one.

But in the meanwhile, Nazi sentiments are on full display, with this particular incident at the forefront. Reacting to the scenario, ADC Chairman Dvir Abramovich, said, “If the Victorian state government does not put an end to this sickening and escalating crisis right now, Victoria may become known as the Swastika state instead of the Garden State. From the special spot in hell reserved for such monsters, Hitler must be smiling, knowing that his followers are continuing his destructive legacy,” he asserted.

“We should not have to wait until white supremacists organize a rally and march down Swanston street waving Nazi flags before acting,” he said. “Our city is being invaded by these agents of hate, by these ‘Final Solutionists’ who are spitting in our faces and who have no fear of proudly exhibiting this evil emblem, which represents the extermination of millions, knowing full well that the law is on their side. Our diggers who sacrificed their lives to defeat the Third Reich must be turning in their graves.”

“No one can feel safe when such terrifying episodes are allowed to happen,” Abramovich said. “Imagine the sheer terror a Holocaust survivor would have felt seeing this unrepentant bigot. I repeat my call for the state government to draft a bill that bans the public displays of Nazism and to pass the law immediately. Enough is enough.”