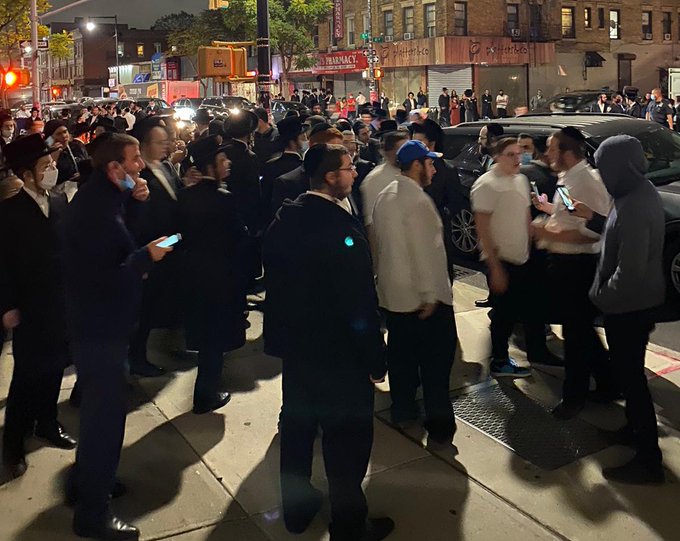 Earlier today, an angry mob of Orthodox protesters rushed towards Journalist Jacob Kornbluh’s residence, voicing out their discontent against the early and unwarranted arrest of councilman Harold ‘Heshy’ Tischler.

Leading the anti-lockdown protests in his own, firebrand way, Heshy Tischler was arrested from a Brooklyn residence on Sunday night, facing charges of inciting violence and assaulting reporter Jacob Kornbluh, during the nightly protests staged twice last week.

A video posted to social media on late Sunday showed a crowd gathered outside Kornbluh’s Brooklyn apartment building after his address was apparently circulated in WhatsApp groups and Twitter. Angered by the way Kornbluh has snitched about the community and led to the arrest of their leader, people in the crowd were heard shouting “Moser”- a Jewish term for someone who informs on other Jews to secular authorities, a charge that some Jewish legal texts say merits the death penalty.

Twitter was booming with several videos and posts that featured demonstrators gathering at the address that was shared via Whatsapp, shouting “Shame on You”- a slogan that was directed right at Kornbluh. In a video posted by ‘Tischler Fan Account’, a man is also heard shouting, “Good morning, Jacob, we’re all waiting for you.”

Earlier last week, Kornbluh had taken to Twitter to share his experience at the protest, claiming that he was hit on the head and had sustained several injuries apart from being called a “nazi” and “Hitler”.

The NYPD was immediately deployed at the scene, outside Kornbluh’s residence, ensuring that no one gets in. As reported by the Time of Israel, a GoFundMe that says it is established for Tischler Sunday evening raised more than $10,000 toward a goal of $50,000 in just four hours, mostly in very small increments. “Please help us raise money for Heshi,” says the fundraising page. “He has done so much for the community, now is our chance to show solidarity.”

The orthodox communities around Brooklyn and Queens have already been severely disappointed by the NYC administration headed by Cuomo and de Blasio, for the new restrictions that have been imposed on the nine zip codes in New York. Triggering this anger further was the arrest of leader Hershy Tischler who was taken away last night in an arrest that was scheduled for today. This led to protesters swarming towards Kornbluh’s residence, claiming him to be a rat.