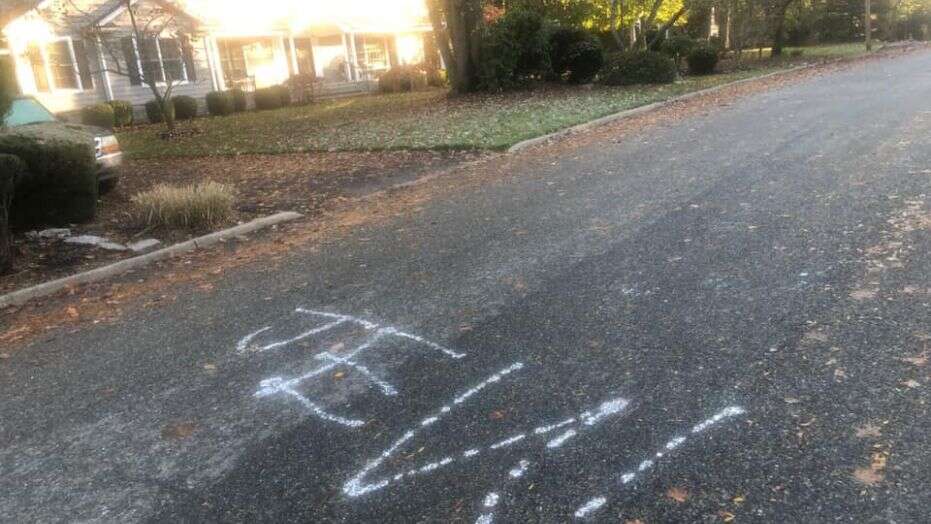 On Sunday morning, residents in the town of Woodcliff Lake witnessed a series of Anti-Semitic and racist graffiti scribbled on their streets after Halloween night, commonly referred to as ‘Mischief Night’, when pranks and vandalism aren’t uncommon.

Disturbing images of Anti-Semitic and racist graffiti drawn on the streets were revealed by Mayor Carols A. Rendo, who also posted, “These images are disturbing and criminal. It is vandalism and a hate crime. The perpetrators will be dealt with to the fullest extent of the law.” The images illustrated the words “Jews” and “Ni**a” scrawled in white chalk on Woodmont Drive which included a swastika, and other vulgar drawings.

Speaking to the NY Post, Rendo said, “A resident texted me early in the morning and I was quite disturbed and upset by it.” He expects that the perpetrators are “ignorant kids who thought it was funny.” The practice of vandalizing property by egging it or throwing toilet paper is common across the US on Mischief night, or Halloween night. Primarily an activity taken up by a gang of teens or school-goers, authorities expect it was the work of a similar group, but with a severely distasteful intention.

Housing quite a considerable Jewish American population in the town, residents found the act discomforting and condemned it while speaking to the media. Danielle Shugar Berkowicz commented on Facebook, “Anyone old enough to draw a swastika is able to understand its true meaning. Really upsetting and horrifying this could happen in our town.”

When questioned by the NY Post, Cathy Pollak, a 31 year resident of the town demanded, “I am appalled by these anti-Semitic acts. This is a hate crime and should be prosecuted to the full extent of the law.”

In search of the perpetrators, the Woodcliff Lake Police tweeted on Sunday saying, “The WCLPD is investigating a bias incident regarding hate speech and symbols displayed in the area of Woodmont Drive. We are taking this matter very seriously as this conduct is unacceptable in our community.”

Just last week, a survey conducted by the American Jewish Committee found that a large majority of Jews in the country find Anti-Semitism to be a problem, especially on the right and in the Republican Party. The new surveys found that 88% of American Jews say anti-Semitism remains a problem in the United States, and incidents like these are proof of the fact.