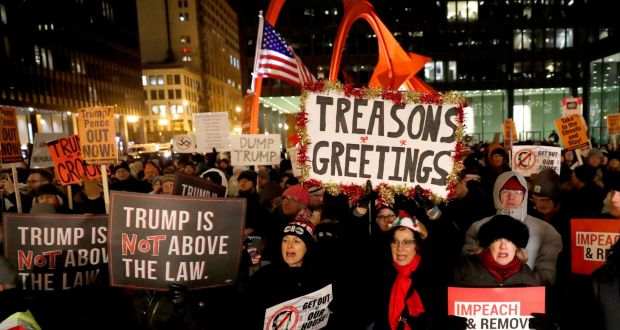 In the early hours of Thursday, in reaction to the Capitol violence, swarms of Anti-Trump and Black Lives Matter protesters held a demonstration near Trump Tower in Midtown Manhattan. As the protests started getting out of hand, two individuals were arrested for disorderly conduct.

As the area saw a heavy police presence, videos posted to social media showed NYPD officers lined up behind metal barricades near the tower, the 58-floor mixed-use skyscraper on Fifth Avenue in Midtown Manhattan where businessman Donald Trump launched his candidacy for president in 2015. Other police officers were seen fanning out in the area, encouraging people to leave the vicinity.

Videos taken at the scene also revealed several officers trying to get a hold of the protesters, who can be seen running through Fifth Avenue. One protester can even be seen banging on an orange traffic cone like a drum, video shows. Protesters kept heckling cops by yelling, “S–t head! S–t head!” and “Blue lives don’t matter. You know that, right?”

A frequent site for protests, particularly for Anti-Trump demonstrators, the Trump Towers in Manhattan were also guarded when Americans went to the polls on Election Day on Nov. 3. It is not unusual for large sanitation trucks or other sizable vehicles to be parked outside the building when any unrest is expected.

Speaking to the NY Post, Protestor Jimmy Brewer, who lives in Brooklyn, said he was “disgusted” by Wednesday’s events in Washington, D.C. “I’m disgusted by this country, dude,” Brewer, 25, told The Post. “What I saw today was just a blatant disregard for fellow Americans and democratic norms.”

Similar protests were staged in Chicago but remained rather peaceful as compared to the ones in New York.

Meanwhile, at the Capitol, as the House reconvened, the U.S. Congress early Thursday certified the Electoral College vote that gave Democrat Joe Biden his presidential victory. Sen. Kelly Loeffler, who is projected to lose her runoff in Georgia against the Rev. Raphael Warnock, was among the senators who said they’d changed their minds about challenging Biden’s win.

“When I arrived in Washington this morning, I fully intended to object to the certification of the electoral votes,” Loeffler, R-Ga., said in remarks from the Senate floor. “However, the events that have transpired today have forced me to reconsider and I cannot now, in good conscience, object.”