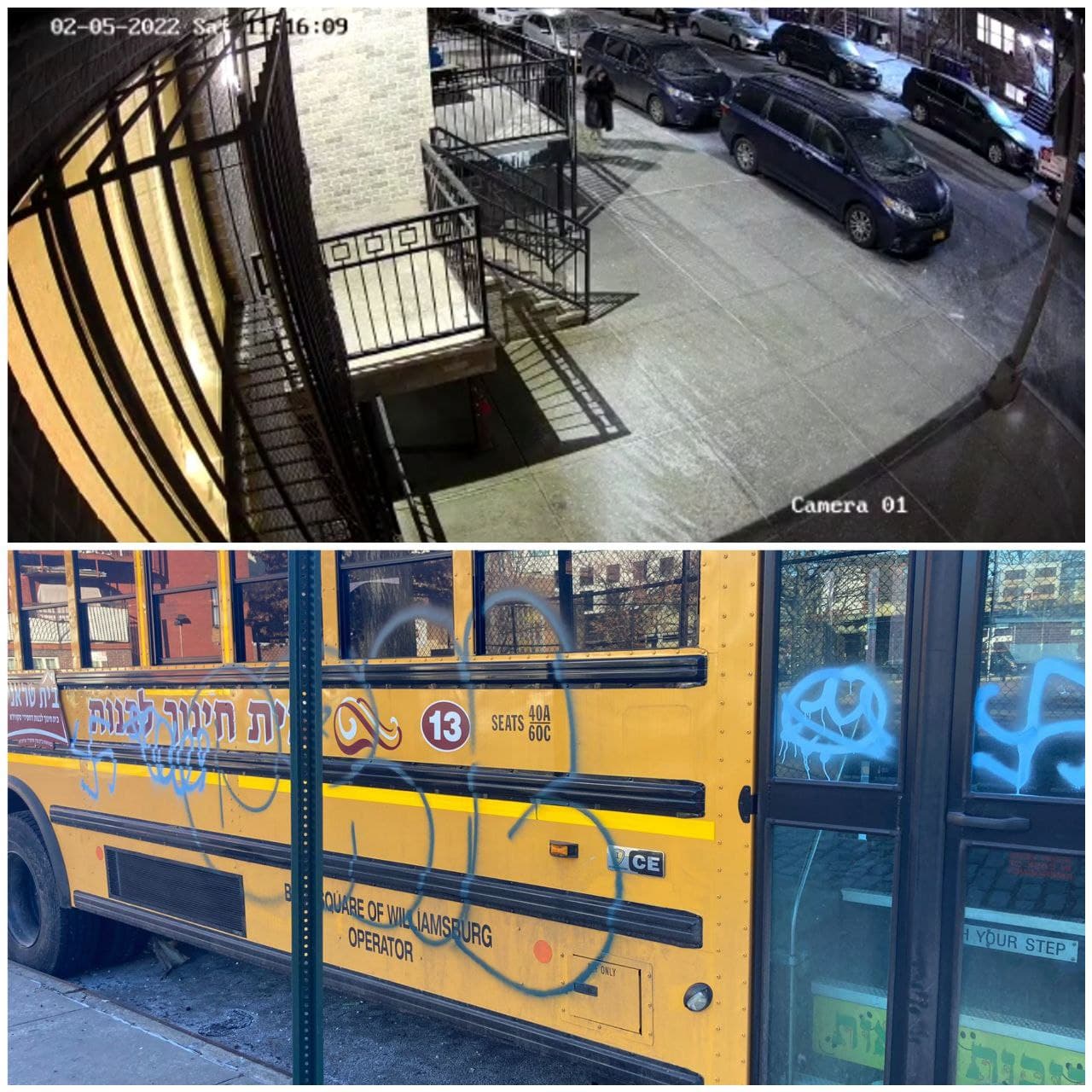 Appalling! Anti-Semitic Attacks Continue in Williamsburg Over the Weekend

An appalling number of anti-Semitic incidents took place in Williamsburg over the weekend. On Friday night, two men in two different incidents were assaulted by a group on Marcy Avenue and Stockton Street. One was violently struck on the head, and both had their shtreimels knocked off. Then an array of swastikas and other spray-painted graffiti was noted on a yeshiva school bus in Williamsburg by Division and Rodney.

“Once again, antisemitism has no place in my district, or anywhere for that matter,” Councilman Chi Ossé, who represents the district, tweeted regarding the incidents that occurred in his jurisdiction. “No person should be assaulted because of their religion. Absolutely no one.”

The community is understandably agitated and appreciates the swift response from community leaders, including the United Jewish Organizations of Williamsburg and North Brooklyn and Shomrim, along with the strong NYPD presence from the 79th and 90th Precincts.

While the community is working on strategies to expand cultural understanding and deepen tolerance, the extraordinary rise in anti-Semitic attacks leaves the Jewish community on edge as the streets have increasingly become a place of fear and trepidation.

The ADL is offering an award of $7,500 for information leading to the arrest and conviction of the individual/s responsible for the two anti-Semitic assaults in Williamsburg on Friday night, February 4. Those with information are encouraged to call NYPD Crime Stoppers Hotline at 1-800-577-TIPS.

Once again, antisemitism has no place in my district, or anywhere for that matter. No person should be assaulted because of their religion. Absolutely no one.

I am in communication with community stakeholders on this matter.pic.twitter.com/Y1vD1lU6rt

We are offering a $7.5k reward for information leading to the arrest and conviction of the individual/s responsible for two reportedly #antisemitic assaults in #Williamsburg on Friday night. Urging those with info to contact @NYPDTips & @NYPDHateCrimes. Our statement here: pic.twitter.com/wGKlH7Vt8u

Friday night Jewish men walking at Marcy-Stockton were assaulted unprovokedly. We're in touch with @NYPD79Pct who are investigating incident and are assisted by @WspuShomrim. Case will be forwarded to @NYPDHateCrimes. Precinct and @NYPDPSA3 will increase patrols in the area.

I am angry & heartbroken by two more anti-Semitic, violent incidents in our community over Shabbos.

A man was violently struck upside the head in Bed Stuy by Marcy & Myrtle. Swastikas & other graffiti were spray painted on yeshiva school bus in Williamsburg by Division & Rodney. pic.twitter.com/AVTskJXqOG