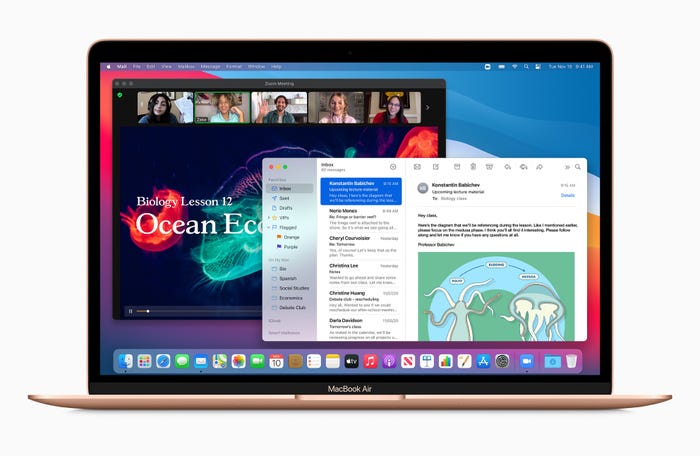 Apple’s New Macbooks are Faster, Sharper And Cost The Same

Apple, on Tuesday, unveiled new versions of its popular MacBook Pro 13-inch, MacBook Air, and Mac Mini computers powered by its fastest-ever, in-house Apple M1 SoC chip. The new laptops are set to be faster, will sport a longer battery life, and will exhibit sharper graphics, all at the same price as the previous models.

The three new computers are the first devices in the world running on processors called M1, that Apple designed itself, rather than the Intel processors the company has been using for the last 15 years. Apple announced earlier this year that it would begin transitioning its entire Mac product line to in-house ARM-based processors from the Intel X86 CPUs that it has been using till now.

The first of this new generation of Apple Silicon processors is called the Apple M1, which features eight cores (four high-power and four power-efficient) as well as a custom integrated GPU, image signal processor, Secure Enclave, and Neural Engine. The Apple M1 is designed with a new unified memory architecture that is said to improve power efficiency and is manufactured on a 5nm process.

During the event on Tuesday, Apple promised that the new range of MacBooks is way more powerful computers that are still as thin and light as your current ones at the same price or less, with much better battery lives. Apple claimed processor speed increases of two to three times over current-generation computers, and up to six times faster graphics performance, making things like playing graphic-intensive games and video and photo editing blazing fast.

Apple said the computers will also be a lot more snappy to use, launching Apple’s own apps almost instantaneously, and waking up from sleep immediately, just like an iPhone or an iPad does when you press the wake button. And because the M1 chip consumes a lot less power, battery life is massively improved. The new MacBook Pro, for instance, gets 20 hours of video playback, Apple said.

The new MacBook Air starts at $999, while the MacBook Pro will cost $1,299. The updated Mac Mini will start at $699. Orders are open today onwards and will be made available next week.