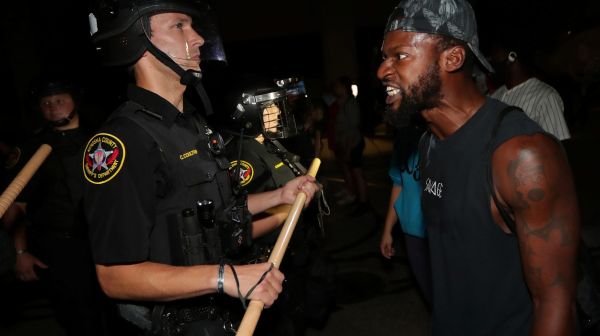 A recent recording of the Kenosha protests revealed a group of heavily armed protesters getting tear-gassed, whilst cornering an armored police truck, in an intense stand-off with the officers.

Meanwhile, 29-year-old Jocaob Blake remains hospitalized after being shot seven times in the back at point-blank range by a white officer trying to stop him from getting into his car. Blake’s attorney Ben Crump has said that Blake continues to be in a critical condition and he may not be able to walk again.

This was just one of several violent incidents from Monday night, where enraged protesters set cars on fire, smashed windows and clashed with officers in riot gear.

Recorded by an on-site reporter, the clip shows several men carrying semi-automatic weapons, accompanied by several others in surrounding the law enforcement vehicle. The protestors were seen taking a jab at the police for “being cowards”, as the officers took to tossing teargas canisters.

The second consecutive night of protesting against the brutal police killing of Jacob Blake, the protestors attempted to shield themselves against the hurled canisters, as the police van moved steered clear.

Blocking the vans’ course in what appears to be a two-minute stand-off, the group moved closer to the truck as it inched forward but eventually had to give in when the tear gas canisters were thrown towards them. As the video clipping progresses, several loud bangs are heard as the truck then makes its way down the street. As the van drove off, several bystanders continued to shout out anti-cop chants.

Apart from this particular incident, groups of armed men were spotted all over the city claiming to protect businesses and protesters during the unrest.

In a cry for justice, Blake’s family is demanding that all three cops at the scene be kicked off the force and that the unidentified officer who fired the shots to be arrested and charged with attempt to murder. The family has also urged citizens to engage in peaceful protests. Furthermore, Jacob Blake’s mother went on record to say, “As I was riding through here, though this city, I noticed a lot of damage. It doesn’t reflect my son or my family. If Jacob knew what was going on as far as that goes, the violence and the destruction, he would be very un-pleased.”

Wisconsin Governor Tony Evers called for the National Guard to subdue the protests from taking an ugly turn, on Monday.