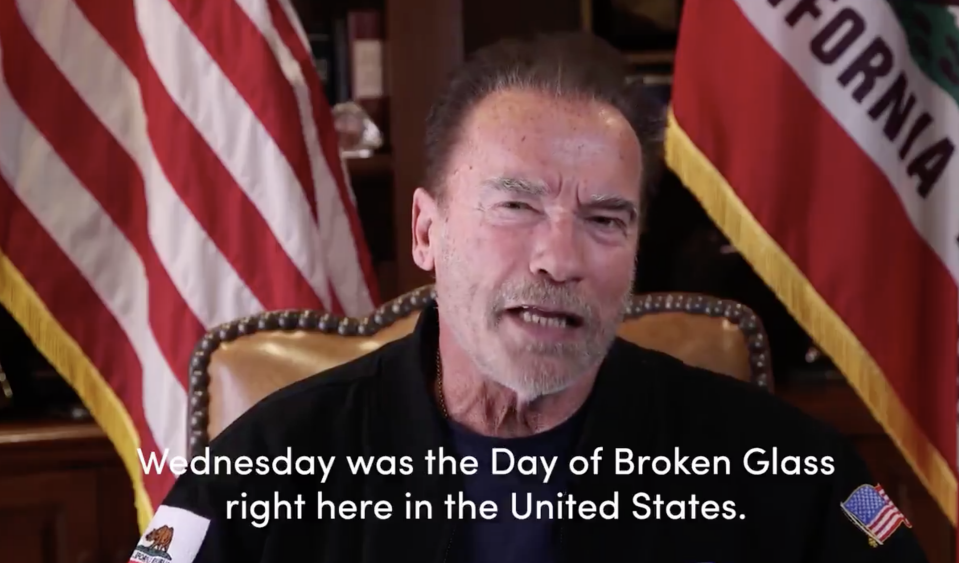 In a video posted on Twitter yesterday, Austrian-born film star and ex-Republican California governor Arnold Schwarzenegger took to condemning the Capitol chaos, comparing it with the harrowing ‘Kristallnacht’ that acted as a prelude to the Holocaust.

Movie star-turned-politician Arnold Schwarzenegger drew stark similarities to the Kristallnacht or “Night of Broken Glass,” which took place on November 9, 1938, wherein thousands of Jewish buildings were destroyed and some 30,000 Jewish men were arrested. Jewish homes, hospitals, and schools were ransacked as attackers demolished buildings with sledgehammers. Rioters destroyed 267 synagogues throughout Germany, Austria, and the Sudetenland. Over 7,000 Jewish businesses were damaged or destroyed, and 30,000 Jewish men were arrested and incarcerated in concentration camps.

Despite being the former Republican governor of California, the 73-year-old superstar compared the insurrection at the Capitol building in Washington, DC, to the rise of Nazi Germany, and in this context, spoke for the first time about the impact of World War II on his father’s conscience and behavior. Gustav Schwarzenegger was a local police chief who joined the Nazi party in 1938.

Claiming that, “Wednesday was the Day of Broken Glass right here in the United States,” he said, “The broken glass was in the windows of the United States Capitol — but the mob did not just shatter glass, they shattered the ideas we took for granted. They did not just break down the doors of the building that houses American democracy, the trampled the very principles on which our country was founded.”

With reference to several instances wherein anti-semitic symbols and items were displayed by protesters during the demonstrations, Schwarzenegger condemned the chaos, whilst also recalling his own childhood in Austria. He said, “I grew up in the ruins of a country that suffered the loss of its democracy… I was surrounded by broken men drinking away the guilt over their participation in the most evil regime in history. Not all of them were rabid anti-Semites or Nazis. Many just went along step-by-step down the road…Now, I’ve never shared this so publicly because it is a painful memory, but my father would come home drunk once or twice a week, and he would scream and hit us and scare my mother,” Schwarzenegger went on. “I did not hold him totally responsible because our neighbor was doing the same to his family, and so was the next neighbor over.”

Openly condemning the President, he then said, “President Trump sought to overturn the results of an election, and of a free election, he sought a coup by misleading people with lies. I know where such lies lead. President Trump is a failed leader. He will go down in history as the worst president ever.”