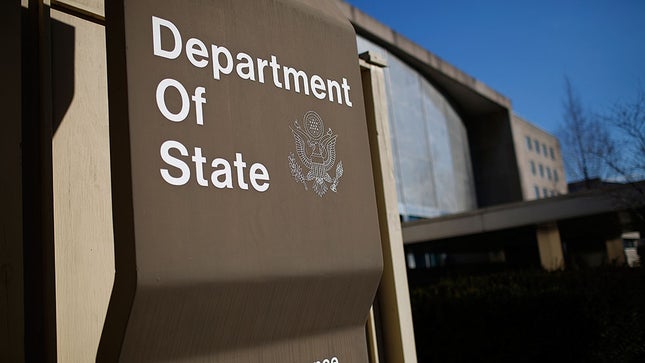 As US State Dept Opens Investigation Into ‘Swastika’ Etched On Elevator, Jewish Groups Stress On The Need For Anti-Semitism Envoy

The US State Department on Tuesday opened a probe into finding out the perpetrator who etched a Swastika on a wood panel in one of the department’s elevators on Monday.

Amidst the rising rate of antisemitic acts across the country, the etched Swastika at the State Department made the hate even more evident. What’s even worse is that the placement of the vandalism was at the elevator near the office of the yet-to-be-nominated ambassador-at-large to monitor and combat anti-Semitism.

In reaction to this incident, several prominent Jewish organizations stressed on the need to appoint the antisemitism envoy immediately, as was promised by the administration a few weeks ago.

“This hateful display of anti-Semitism, reportedly nearby our own federal government’s office to fight such things, is extremely disturbing, repugnant and simply un-American,” Rep. Josh Gottheimer (D-N.J.) said in a statement on Tuesday. “It is critical that a U.S. ambassador-at-large to monitor and combat anti-Semitism be immediately named.”

Meanwhile, U.S. Secretary of State Antony Blinken in an e-mailed statement said, “As this painfully reminds us, anti-Semitism isn’t a relic of the past. It’s still a force in the world, including close to home. And it’s abhorrent,” wrote Blinken. “It has no place in the United States, at the State Department or anywhere else. And we must be relentless in standing up and rejecting it. To our Jewish colleagues: please know how grateful we are for your service and how proud we are to be your colleagues.”