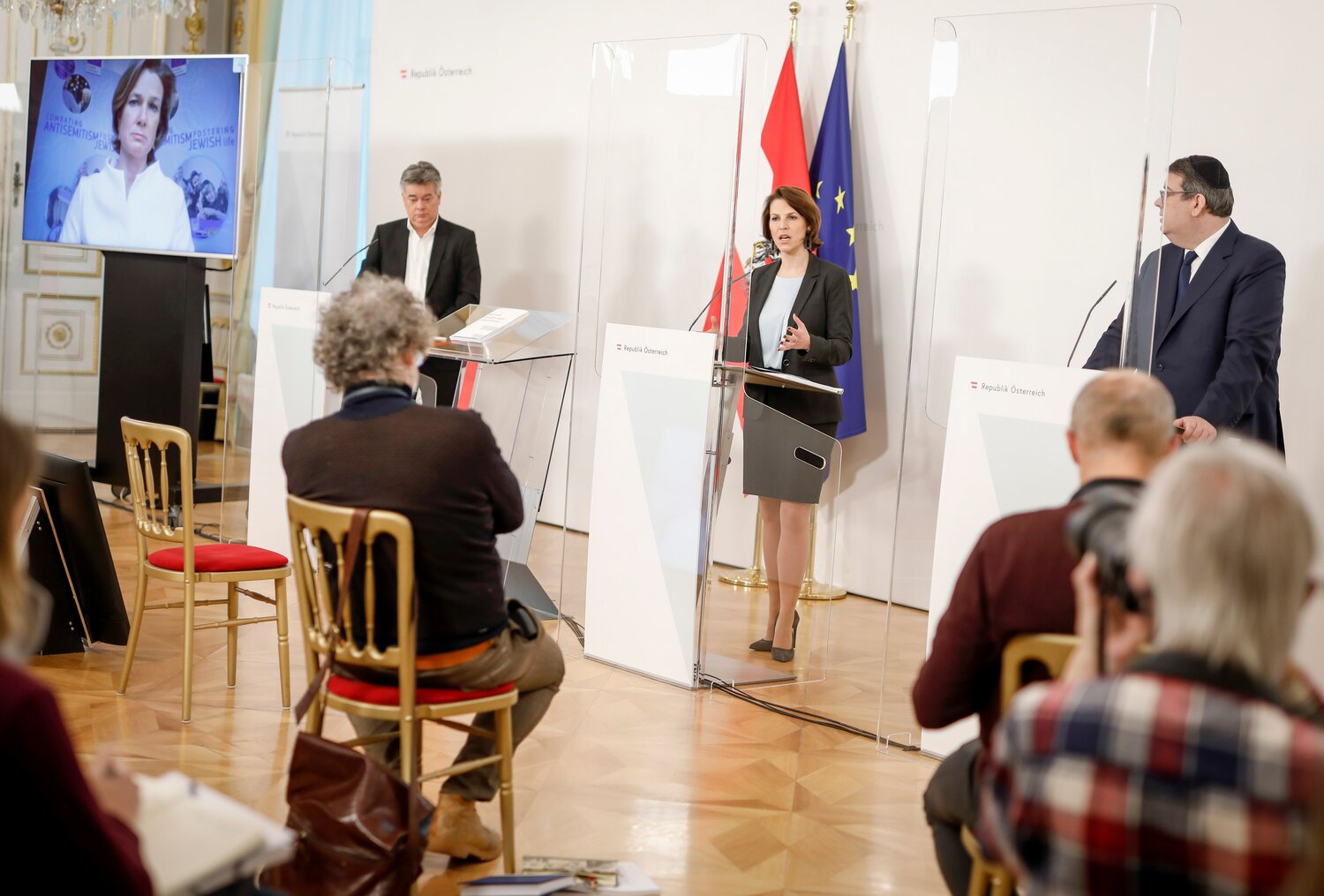 On Thursday last week, the Austrian government, headed by Europe Minister, Karoline Edtstadler, presented a national strategy on fighting rising anti-Semitism that includes improving the protection of synagogues, improved education about Judaism, and stricter prosecution of hate crimes against Jews.

On January 21, 2021, Federal Minister for the EU and the Constitution Karoline Edtstadler and Vice-Chancellor Werner Kogler, presented the National Strategy of the Austrian Federal Government to combat and prevent all forms of anti-Semitism.

In her address, Edtstadler began by emphasizing that anti-Semitism has “many faces and forms of manifestation” and “the fight against it is a central concern of the Federal Government. Austria has a historical responsibility, especially against the backdrop of the Shoah, the darkest chapter of our history. She recalled the recent assaults against Jews in Austria such as the one last summer on Elie Rosen, the head of the Jewish community of Graz, as well as the terrorist attack in November 2020 in downtown Vienna, near the city’s main synagogue.

The new measures intend to battle anti-Semitism in all its forms and wherever it expresses itself — from online chat groups to hate speech in corner bars or expressions of hatred against Jews at public protests such as the current rallies against coronavirus regulations, Edtstadler said. “Jews have been turned into enemy figures again and again throughout history. A wave of conspiracy theories with anti-Semitic content is sweeping through the internet. It scares me that it is spilling over from the digital to the analog world,” Edtstadler emphasized. What was written on social media yesterday can now be experienced on the streets, she said.

There are some groups that trivialize the Holocaust, she said. “As minister for constitutional affairs, I agree with the right to freedom of expression. But too many participants in protests are willing to accept that Nazi slogans are spread. Violence starts with words,” the Minister said.

“We want to fight anti-Semitism at the margins and in the middle (of our society), no matter where it comes from and no matter whether it is imported or domestic,” the Federal Minister pointed out, referring to the prevailing tendencies. “With the Jewish Cultural Heritage Act, Jewish communities each receive four million Euros annually to promote Jewish life. The 38 measures from the various ministries that have now been drawn up are brought together in a strategy that is coordinated centrally in the Federal Chancellery and is to be implemented by a staff unit,” Minister Edtstadler announced.

The president of the Jewish community of Vienna, Oskar Deutsch, welcomed the government’s initiative saying, “Jews are always the first ones who are affected” by discrimination, Deutsch warned, adding that the fight against anti-Semitism needs to be an effort by the whole of society, not just the Jewish community.