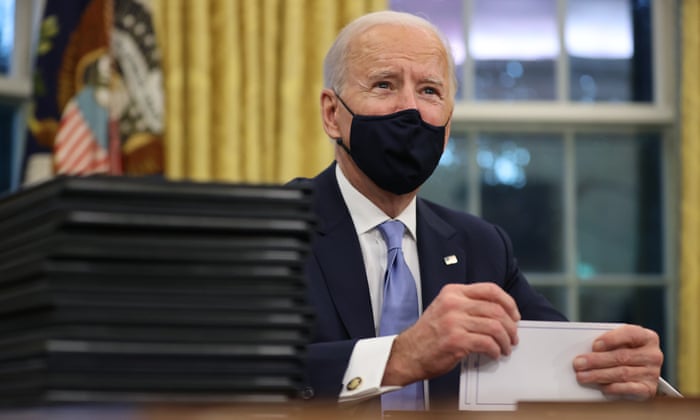 A week since his inauguration, President Joe Biden has reversed a multitude of executive orders…and that’s about it. Under scrutiny for being so heavily reliant on changing 3 dozen plus orders, Biden was also questioned for not showing enough urgency for the COVID-19 relief package he was so eager to float out until last week.

After reversing more than three dozen executive orders and directives aimed at addressing the coronavirus pandemic as well as other issues including environmental regulations, immigration policies, and racial justice, Biden has been criticized to be focusing only on secondary issues rather than ones that are more important at the moment.

In reaction to this, Senate Republican leader Mitch McConnell said Thursday that Biden’s early reliance on executive action is at odds with the Democrat’s pledge as a candidate to be a consensus builder. The New York Times editorial board on Thursday ran an opinion piece headlined “Ease up on the Executive Actions, Joe.”

Reacting to the criticism, White House communications director Kate Bedingfield tweeted, “Of course we are also pursuing our agenda through legislation. It’s why we are working so hard to get the American Rescue Plan passed, for starters.” On Thursday, Biden had specifically quipped that his latest executive actions were an effort to “undo the damage Trump has done” by fiat rather than “initiating any new law.”

In his Senate floor speech, McConnell offered pointed out the fact that as a candidate, Biden had declared “you can’t legislate by executive action unless you are a dictator.” In fact, Biden at an October ABC News town hall had said there are certain “things you can’t do by the executive order unless you’re a dictator” during an exchange about how quickly he’d push his plan to raise taxes on corporations and wealthy Americans. McConnell also scoffed that Biden in his first week in the White House “signed more than 30 unilateral actions and working Americans are getting short shrift.” He similarly criticized Obama for “imposing his will unilaterally” through executive orders and memoranda.

Defending the President’s moves, White House press secretary Jen Psaki said, “There are steps, including overturning some of the harmful, detrimental, and, yes, immoral actions of the prior administration that he felt he could not wait to overturn, and that’s exactly what he did.”