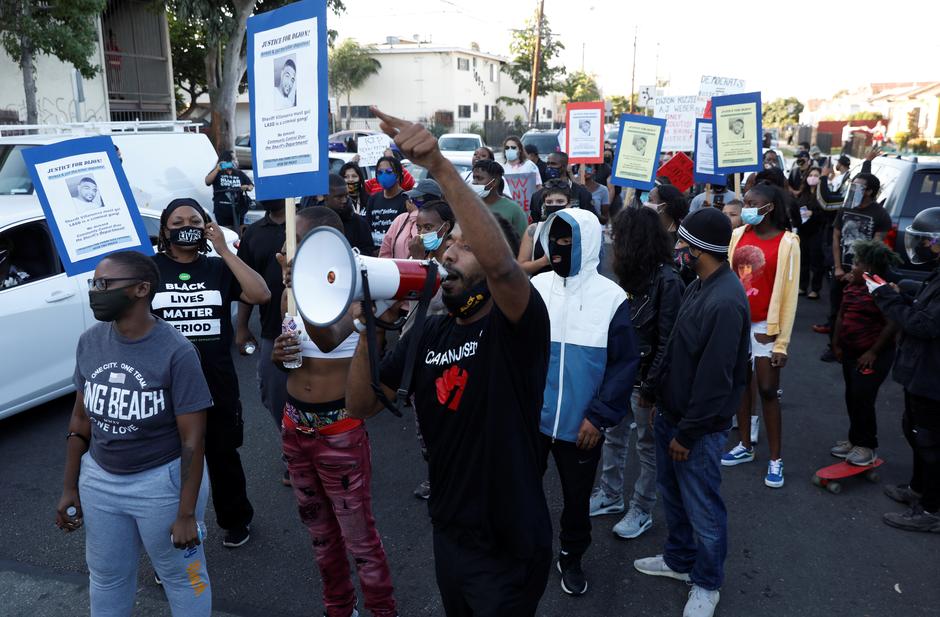 In yet another law enforcement brutality, two Los Angeles County Sheriff’s deputies fatally shot Dijon Kizzee, a 29-year-old Black man, during a confrontation on Monday afternoon in South LA, sparking protests at the scene on Tuesday.

According to a statement made by the sheriff’s- at about 3:15 p.m. local time two deputies tried to stop Kizzee, who was riding a bicycle “in violation of vehicle codes.” When they approached him, he got off the bicycle and ran.

Sheriff’s Lt. Brandon Dean told reporters that deputies caught up to the suspect about a block away, and when they approached him, the man punched one of the deputies in the face and dropped items of clothing he had been carrying. It was at that point deputies “noticed that inside the clothing items he dropped was a black semiautomatic handgun, and that’s when both deputies opened fire, shooting the man several times,” Dean said. Investigators recovered a handgun from the scene.

With no bodycams to corroborate this statement, Ben Crump, a prominent civil rights activist and lawyer who is also connected to the Jacob Blake shooting said, “They said he ran, dropped the handgun. He didn’t pick it up, but cops shot him in the back 20+ times and left him for hours.”

A neighboring resident at the scene of crime claims to have seen the scuffle and shooting from across the street. She told Reuters on Tuesday that she never saw Kizzee throwing a punch and neither did she see a gun, claiming that “he wasn’t a threat”.

Activist Najee Ali, who is representing the family said, “Being in possession of a gun, but actually using a gun, having it in your hands are two different things. He (Kizzee) did not point the gun” at officers.

Protestors took to the streets on Tuesday to demand justice for Kizzee and his family, who have called for Sheriff Alex Villanueva to release names of the deputies whilst ensuring their “arrest and criminal prosecution”. The family has also stressed the implementation of body cameras across the force.

“I’m sad and mad at the same time,” Kizzee’s aunt Fletcher Fair said in a news conference. “This is not America. This is ridiculous. I don’t know what, what kind of society … We are human. I don’t give a damn what race you are. We are human beings.”

The District Attorney’s Office and Office of the Inspector General are assisting in the investigation.