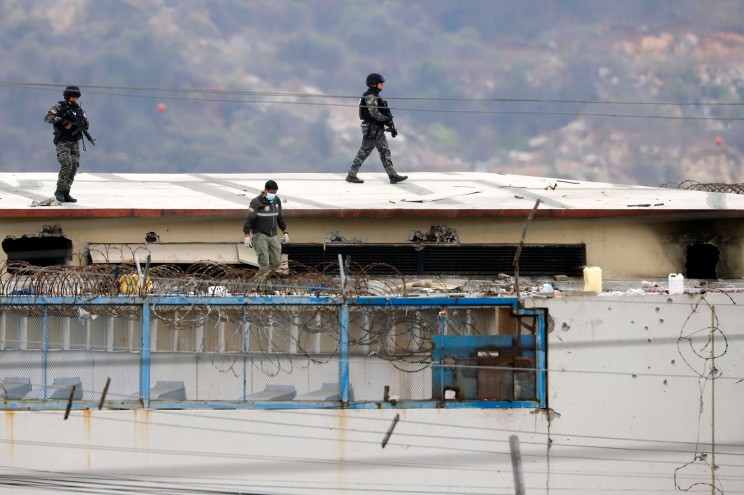 Sixty-eight inmates were killed and 25 others badly injured when two rival gangs exchanged gunfire and detonated explosives inside of an Ecuadorian prison on Saturday.

According to reports, the riot lasted for eight hours at the Litoral Penitentiary in the coastal city of Guayaquil, which officials have linked to international drug cartels.

To stop the violence 900 law enforcement officers were dispatched inside the deadly prison.

In a statement, Presidential spokesman Carlos Jijón said that after nightfall “the situation is controlled throughout the penitentiary.”

The number of casualties is high because the inmates “tried to dynamite a wall to get into Pavilion 2 to carry out a massacre.

The inmates also burned mattresses to try to drown (their rivals) in smoke.”

Governor of the Guayas province Pablo Arosemana the riot became very bloody since most of the inmates involves are drug traffickers.

Initial investigations have revealed that the weapons and ammunition were smuggled through vehicles delivering supplies as well as by drones.

Last September 30, a deadly gang battle also occurred inside a penitentiary in Ecuador resulted in the death of 116 prisoners wherein five of whom are beheaded.

Prison officials in Ecuador said aside from the casualties, 80 prisoners were also injured in the prison riot at Litoral penitentiary in the coastal city of Guayaquil.

Because of the situation, President Guillermo Lasso ordered a state of emergency in Ecuador’s prison system, allowing the government to deploy the police and soldiers to penitentiaries among other powers.

“It is regrettable that the prisons are being turned into territories for power disputes by criminal gangs,” Lasso said.

Initial investigation has shown that the riot started after gangs linked to international drug cartels are fighting for control of the lockup.