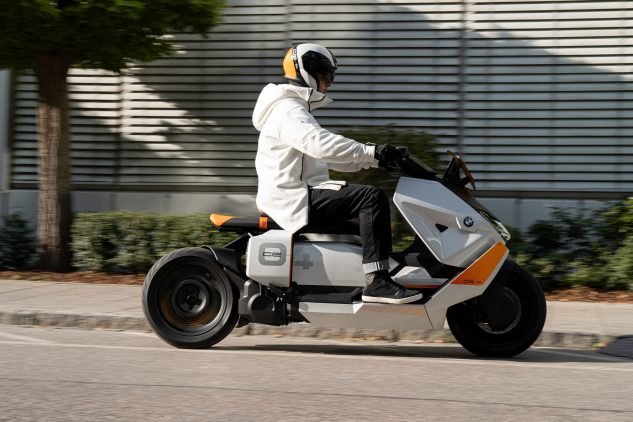 Showing off the concept for its all-new cyberpunk, modish looking new scooter, BMW has sent the motor industry in a tizzy with a reveal of its electric Motorrad Definition CE 04.

Making a smashing comeback in the world of electric mobility, BMW hasn’t released any specifications or details of the concept scooter, but said its aim is to “redefine the scooter segment”. There is also no news about whether or not the scooter will be turned into a real motorcycle or when and for how much people might be able to buy it, but going by the look of it, the vehicle seems exceptionally promising, and not to forget- exceedingly eye-catching.

Edgar Heinrich, Head of Design BMW Motorrad, explained that the e-scooter is “The logical continuation of the electromobility strategy for urban conurbations and provides a concrete preview of what a contemporary production vehicle could look like.”

Previously,  BMW’s 80 mph (130 km/h) C Evolution electric scooter had been first unveiled in 2013, but there’s been no news of a follow-up ever since. The company was once a leader in the electric scooter space but has fallen behind recently, which is why the new concept could be quite the redemption.

Based on the images of the futuristic two-wheeler, the Motorrad Definition CE 04 sports an elongated, low vehicle body with a diagonally rising front end. The battery lies flat in the underbody, creating more space for storage, giving ample of space to stash away your helmet. Battery specs for the scooter aren’t available yet, but the original BMW C Evolution used a battery module from the BMW i3, so we could see something similar come up here, as well. Also, going by the pictures, the CE 04 sports a 10.25″ touchscreen, which is the largest yet on an electric scooter.

“A scooter is not a ‘fun bike’ which is taken for a ride in the mountains in fine weather, but a practical everyday vehicle for driving from home to the office or meeting friends in the evening – simply a vehicle for every day in the city,” said Alexander Buckan, who heads BMW’s Motorrad division, in a statement, hinting that the vehicle would be perfect for daily use.