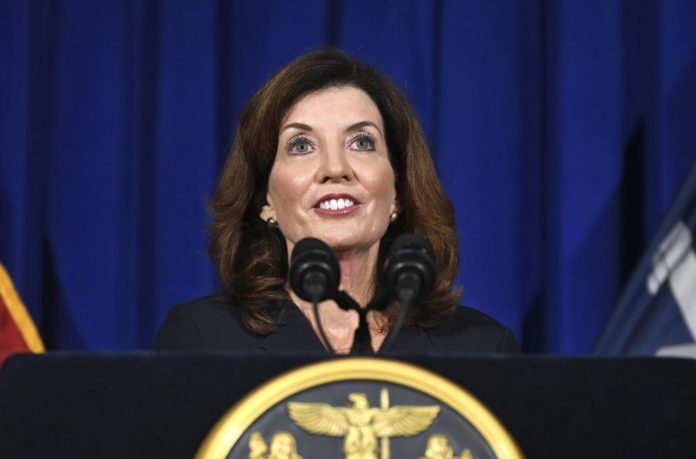 Both Hasidic Factions In NY Endorse Hochul For Gov Run

This week, among several other endorsements, Governor Kathy Hochul who is set to run for Governor, secured the endorsement of both Satmar factions of New York.

Bringing in massive Jewish support ahead of the Democratic primary on June 28, Hochul was awarded endorsement letters in the weekly publications of the Aharonim and Zalonim.

Source: The Forward Photo by Kevin P. Coughlin / Office of the Governor

A few months ago, over a dozen leaders in the Five Towns and Far Rockaway in Queens stood with Hochul as they announced their support. More endorsements are slated to be made public in the coming days.

In the endorsement letters, the community leaders expressed their gratitude to Governor Hochul and her running mate Lt. Governor Antonio Delgado. They urged members of the community who are eligible to vote to make their voice heard by coming out to vote for another four years of accomplishments that would benefit the community.

This is the result of Hochul establishing a working relationship with community leaders and showing up to local events while visiting day schools and yeshivas across the state. She has also spoken out forcefully against antisemitism and the rise in violent attacks against Jews, in particular Hasidic Jews who are more visibly Jewish.

Moreover, Hochul has also allocated more funds for education programs in private schools and yeshivas, added millions in grants to strengthen safety and security measures at Jewish institutions and nonprofit organizations, and increased the reimbursement cap for victims of hate crimes by $2,000.