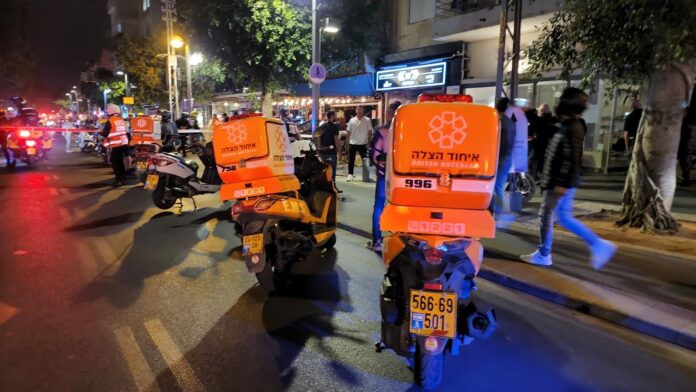 UPDATE: Tel Aviv Summary of casualties as of 4:30 PM

Two people were killed and many others injured when two suspects made a terrorist attack on Dizengoff Street in Tel Aviv on Thursday.

The police added one of the suspects in the attack had already been killed while the other suspect is currently barricaded inside a building near the site of the shootings, with the building surrounded by police officers with weapons trained at the apartment he is in.

Surveillance footage of the attack shows one of the terrorists driving on a motorbike past the bar and opening fire at an individual attempting to flee the scene.

United Hatzalah volunteer EMT Akiva Kauffman, who was one of the first responders at the scene at Dizengoff Street, revealed he had treated and transported one person in serious condition in one of United Hatzalah’s ambulances to the hospital.

Sources said the Psycho trauma and Crisis Response Unit also responded to the incident and treated numerous people who suffered emotional shock and trauma due to having witnessed the shootings.