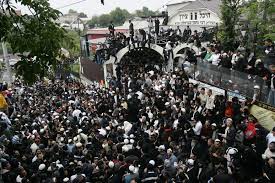 BREAKING: Due to the ongoing war with Russia, Ukraine Blocks Visitors to Uman for Rosh Hashana

On Thursday morning, the Ukrainian government announced that due to its ongoing war with Russia, it could not allow visitors to visit the kever of Rebbe Nachman in Uman on Rosh Hashana.

The country’s ambassador to Israel, Yevgen Korniychuk, said in a statement said it would be a huge security concern for them if these visitors were allowed to visit Uman for Rosh Hashana this year.

“Due to concerns for the lives and well-being of the visitors to Ukraine and in light of the blatant Russian war in our country, despite all efforts, we can not guarantee the security of pilgrims and do not currently allow tourists and visitors to enter Ukraine,” Korniychuk said.

“On this occasion, we address you because your prayers are important to us,” Korniychuk added.

According to reports, the annual pilgrimage to the tziyon is a yearly highlight for an untold number of chassidim, whose davening during the Yomim Noraim is uplifted as they spend time near their revered Rebbe.

“Please pray that before Rosh Hashana, the war in Ukraine, which broke out due to blatant and cruel Russian aggression, will come to an end, and pray for the victory of Ukraine,” he said.

“We hope that the prayers will be fulfilled and that Ukraine will once again be a country that generously receives visitors from Israel, especially Jews who come to Ukraine to visit the graves of the righteous,” he added.