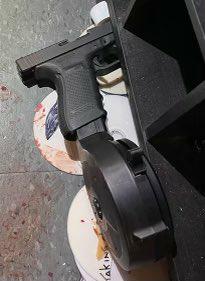 A former police officer of NYPD who now works as a private detective said the gun used by the gunman who killed a cop and seriously wounding another police officer at a Harlem apartment is usually used in war just like those found in wartorn Afghanistan.

Bo Dietl said if you possess a high-capacity ammunition magazine or a “drum” magazine you have only one goal to kill not one but multiple people.

Dietl explained a drum magazine allows the Glock to hold an additional 40 rounds to the firearm’s usual 10.

Sources said New York prohibits the use of magazines holding more than 10 rounds unless you are active in law enforcement or military.

“Who carries this? A person who wants to kill a lot of people,” Dietl said.

“We are lucky we don’t have three cops dead.”

He said a similar gun was also often used in Afghanistan.

“This [type of firearm] is being carried by the criminal element looking to take out as many people as they can. Now the cops become the victims … There’s no reason for any individual to have this kind of power except to kill people,” he said.

McNeil was later killed by another police officer who joined the police operation to supposedly calm down McNeil who had a feud with his mother.

Meanwhile, it was learned that the feud between McNeil and his mother is due to the vegan diet of the former.