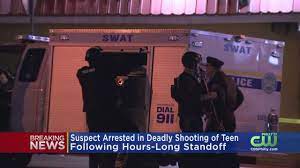 BREAKING: Multiple charges for man who made violent attacks on Orthodox Jews on Friday

On Friday, multiple criminal charges were filed against a 27-year-old man who committed a violent crime spree in the Lakewood Jewish community.

The charges were connected with the incidents in Lakewood and Jackson townships, which left four Orthodox Jews injured – some in critical condition.

According to reports, on April 8, at around 1:15 p.m., officers from the Lakewood Township Police Department were summoned to Martin Luther King Drive and Pine Street for a report of a carjacking.

Sources said a male suspect identified later as Marsh approached a 2016 Toyota Camry, pulled the Orthodox Jewish driver out of the vehicle, punched him repeatedly in the face, and fled the area in the vehicle.

After the attack, the victim was transported by Hatzolah to the hospital.

Sources said Marsh had attempted to carjack another vehicle driven by an Orthodox Jew before this but was unsuccessful.

At around 6 p.m. that same day, Lakewood Township Police also received a report of a pedestrian being struck by a motor vehicle on Central Avenue and Carlton Avenue.

Police investigation showed that an Orthodox Jewish male victim had been struck by a dark-colored vehicle.
Hatzolah transported the victim to Jersey Shore University Medical Center in Neptune, where he is listed in critical but stable condition.

Upon arrival, the police officer saw an Orthodox Jewish male victim with a stab wound to his chest.

At 8:20 p.m., Officers from the Jackson Township Police Department responded to another 911 call for a report of a pedestrian being struck by a motor vehicle in Galassi Court.

Responding officers determined that the male victim had been struck by the same vehicle that was taken in the carjacking incident in Lakewood earlier in the day.

Hatzolah transported the victim to Jersey Shore University Medical Center, where he is listed in critical but stable condition.

Upon more profound investigation of the series of crimes, the police discovered that Marsh was responsible for all of these.

That same day, the police arrested Marsh at his residence in Manchester Township.

The suspect is now in detention.