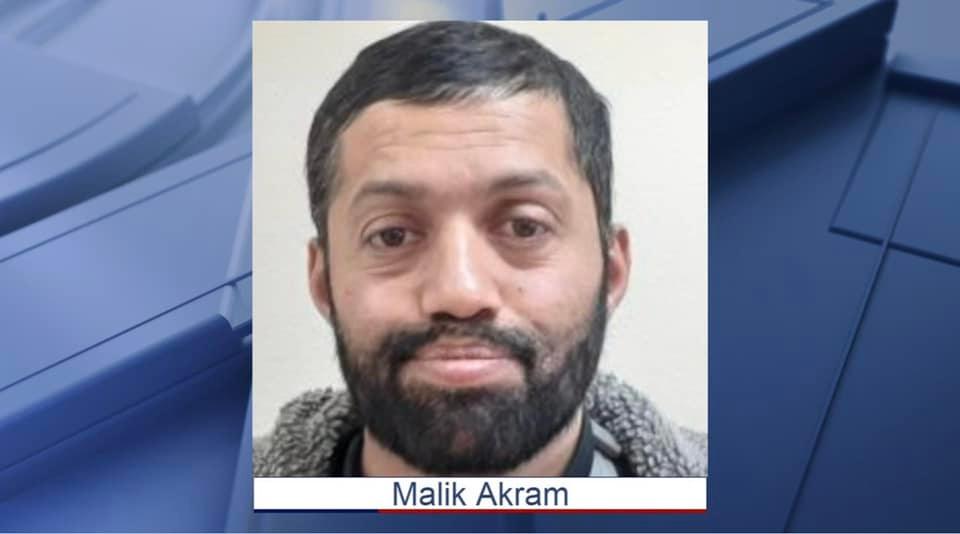 The Federal Burea of Investigation said the slain hostage-taker at a Texas Reformed synagogue at the 6100 block of Pleasant Run Road in Colleyville northeast of Fort Worth, Texas is a 44-year-old British citizen.

The FBI identified the suspect who earlier hostage a synagogue rabbi and three other worshippers for 10 hours on Saturday as Malik Faisal Akram.

“At this time, there is no indication that other individuals are involved,” FBI said.

Rabbi Charlie Cytron-Walker revealed on Sunday that the assailant was “increasingly belligerent and threatening” in the standoff’s last hour.

Walker is grateful to the law enforcement for their efforts – and to many others for their prayers.

Earlier, following a 10-hour standoff at the Beth Israel synagogue in Colleyville, Texas, the hostage-taker later identified as Malik Faisal Akram was shot dead by a successful operation involving over 50 police officers. All hostages are rescued and safe.

Sources said the shul let the gunman in because they thought he was an unhoused person in need of shelter.

After the successful rescue of four hostages and the neutralization of the lone hostage-taker at a Texas Reformed synagogue on Saturday, it was learned that almost 200 law enforcement officers have joined forces to resolve the situation.

The FBI alone brought 60-70 people from DC and they are grateful that their hard work has ended in a successful rescue of all hostages who are all adults.

The FBI said they are now interrogating the four hostages who are all in good physical condition.

The FBI added that they already identified the gunman but will not yet name him publicly as their investigation of the incident is still ongoing.

Both PD and the FBI will not say if weapons were found on the dead suspect.

The FBI revealed the Texas synagogue hostage taker’s demands were specifically focused on issues not connected to the Jewish community.

Meanwhile, President Joe Biden is grateful for the safe rescue of the hostages.

Biden thanked the courageous work of the state, local, and federal law enforcement for the rescue of the hostages.

“I am grateful to the tireless work of law enforcement at all levels who acted cooperatively and fearlessly to rescue the hostages. We are sending love and strength to the members of Congregation Beth Israel, Colleyville, and the Jewish community,” Biden said in a statement.

Biden said although the motive of the hostage-taking is not yet clear at the moment, he wants his administration will always run after those people who spread hate.

“But let me be clear to anyone who intends to spread hate—we will stand against anti-Semitism and against the rise of extremism in this country,” Biden added in the same statement.

The hostage-taker earlier told Colleyville congregation that he’s the brother of an ISIS member Aafia Siddiqui, incarcerated in Fort Worth, and he flew to Texas. He also said Beth Israel was the closest synagogue to DFW airport.

However, a  lawyer for Siddiqui’s biological brother confirmed in a statement that it was not Muhammad Siddiqui holding people hostage.

John Floyd, board chair of CAIR Houston and longtime legal counsel for Siddiqui’s brother, said in a statement that his client is not responsible for the situation, is not near Dallas-Fort Worth and that hostage-taker has nothing to do with Siddiqui.

“We want the assailant to know that his actions are wicked and directly undermine those of us who are seeking justice for Dr. Aafia,” Floyd said in a statement.

A synagogue rabbi and three other worshippers were taken hostage by a man Saturday during services at a Texas Reformed synagogue at the 6100 block of Pleasant Run Road in Colleyville northeast of Fort Worth, Texas.

The Colleyville Police Department said the suspect identified as Mohammed Siddiqui apparently in possession of explosives could be heard ranting angrily in a Livestream before the feed cut out.

The local police said a SWAT team is now being dispatched to rescue the hostages and arrest the suspect.

At the moment, the police are still determining the motive of the suspect.

But sources said the hostage-taker was heard demanding the release of Aafia Siddiqui, a Pakistani neuroscientist suspected of having ties to al-Qaeda, who was convicted of trying to kill U.S. military officers while in custody in Afghanistan.

Siddiqui is currently detained at a federal prison in Texas.

In the initial police investigation, the police were first called to the synagogue around 11 a.m. and people were evacuated from the surrounding neighborhood soon after that.

Law enforcement shut down access to the roads surrounding the synagogue Saturday afternoon.

Colleyville, a community of about 26,000 people, is about 15 miles (23 kilometers) northeast of Fort Worth.

Meanwhile, Israeli Prime Minister Naftali Bennett is closely monitoring the situation and is praying for the safe release of the hostages.

“We pray for the safety of the hostages and rescuers,” Bennett tweeted.

Hostage Rabbi is a friend of the Muslim community

The local Muslim community in Texas has condemned the hostage-taking of a Rabbi and three other worshippers at a Colleyville synagogue Saturday.

Jawaid Alam, president of the Islamic Center of Southlake said Congregation Beth Israel Rabbi Charlie Cytron-Walker is a personal friend and a friend of the Muslim community who has promoted peace and cooperation across faiths.

“He is a peace-loving person, a Rabbi and Jewish leader, but a true friend of the Muslim community,” Alam said.

Alam said the Muslim community is saddened by the hostage-taking incident the rabbi is a peace-loving person who promoted interfaith talks.

“He has taught us how to live with people different from you and love each other,” he said.

“The Muslim community is with them and we will do anything we possibly can for them,” he added.