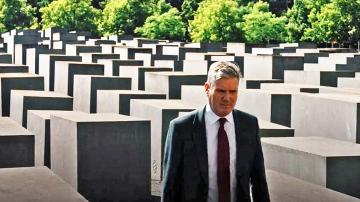 Shown taking a walk through the Memorial to the Murdered Jews of Europe in Berlin,  a campaign ad from Labour Party leader Sir Keir Starmer has come under fire from Jews in UK and Germany for being completely irrelevant to the Jewish community.

The campaign ad boasts of several issues and wins, none of which were specifically Jewish. What’s even problematic is that the ad comes after the Labour Party—once led by Jeremy Corbin, who often spoke out against Israel, attended pro-Palestinian events, and was tainted by anti-Semitism run amuck—continues to deal with allegations of anti-Semitism and anti-Zionism within its ranks.

In reaction to the video, The Tikvah Institute in Germany used the hashtags #desturbing and #Berlin, and tweeted: “Hallo @UK Labour, why do you use the Holocaust Memorial (Memorial to the Murdered Jews of Europe) as a background for your election campaign video without even mentioned the Shoah with any single word?”

Meanwhile,  Joe Glasman, Campaign Against Antisemitism’s head of political and government investigations said, “It is a matter of decency and long-established convention in Germany that you never stoop to using the Berlin Holocaust memorial as some kind of a prop. But to incorporate the memorial as the backdrop for a political clip that does not even mention the Holocaust is an insult. This is especially so for a political party that itself still has serious problems with anti-Semitism in its ranks.

Glasman added that “exploiting a visit to the Holocaust memorial like this for campaigning purposes is not just tasteless, it is manipulative and repulsive.”