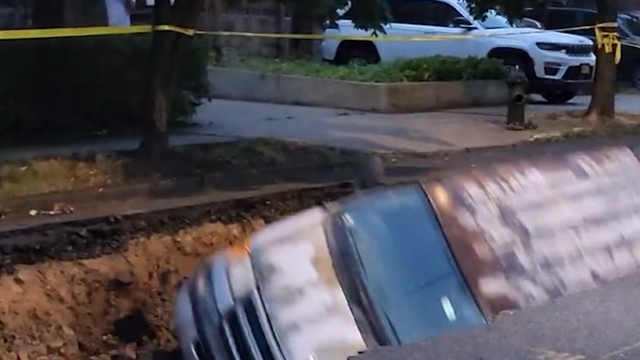 A giant sinkhole that opened up in a Bronx street on Tuesday swallowed a whole van amidst severe weather that slammed the tri-state area with flash floods and torrential rain.

According to authorities, the bad weather was most probably not a factor in the sinkhole’s formation, but tragedy struck as a video showed a full-size white van parked on Radcliff Avenue that suddenly started to lean to the left as the pavement buckled beneath it. The entire vehicle then plunges to the ground as the street gives way.

Speaking about the incident was the owner of the van- Antonio Papadopoulos who claimed he was glad the incident took place. While explaining to the media why he felt happy, he said, “Because I lost my van. I don’t want to be sad or mad or this … I want to be happy.”

But, the city can’t afford to be as optimistic as Papadopoulos. Going ahead, repair work is likely to be extensive because crews have to rebuild the entire subsurface infrastructure and restore the roadway.

This being said, even once it’s fixed, Morris Park residents fear it could happen again. They say another sinkhole opened up in the area a year or so ago and it took a year to fully repair that. A man who happened to walk by News 4 cameras said he wasn’t there that time, but acknowledged “it’s a couple of times it’s happened here.”

Although no one was injured, about 75 customers lost water service. It’s not clear if it was fully restored by Tuesday morning.