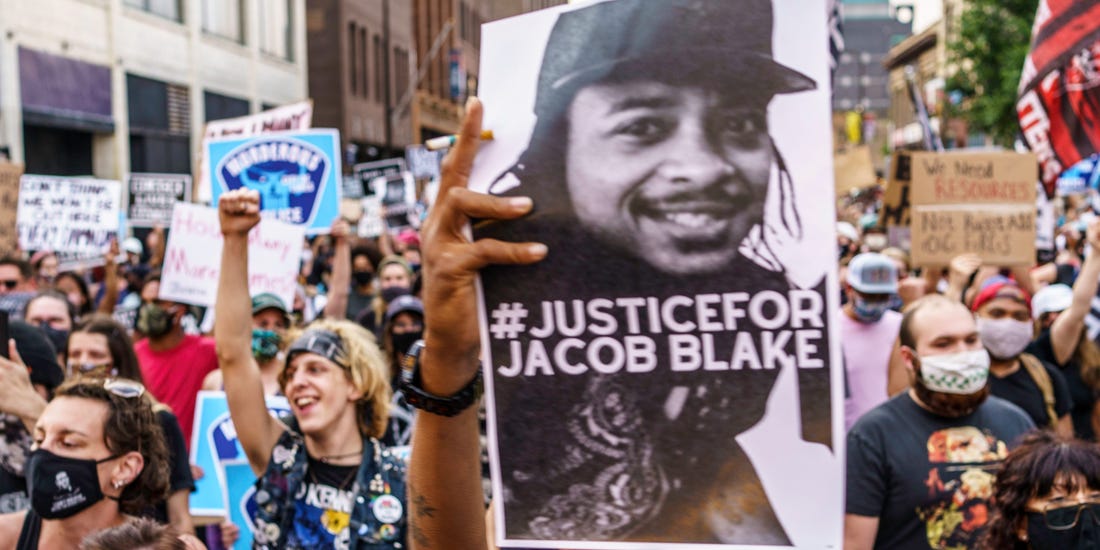 With no inputs or details of the perpetrators yet, the shooting of Jacob Blake has set off unceasing protests despite a curfew being imposed in the city of Kenosha, since the incident occurred yesterday.

Three buildings and multiple cars were set ablaze in Kenosha, Wisconsin amidst protests against police brutality and relentless instances of racism, late on Monday night. The reappearance of the ‘Black Lives Matter’Campaign was triggered after the shooting of 29-year-old Jacob Blake, who is still undergoing intensive medical care. Soon after the video of the shooting went viral, demonstrators took to the streets, in a demand for justice. The video illustrated the police manhandling Blake and pulling him by his tank top, after which seven shots are heard, followed by the sustained sound of a car horn.

Though there is no information on who these officers were and why they decided to take the law in their own hands by shooting an unarmed victim, two Wisconsin police officers have since been placed on administrative leave, and the police union has urged the public to withhold judgment until “all the facts are known.”

The incident in Kenosha sparked off a barrage of protests across the US in New York, Minneapolis, and Wisconsin, among others. Five people have also been arrested in Minneapolis for misdemeanor and damage to public property, according to the Police.

Closer to home, protesters set ablaze buildings and vehicles as they broke the 8 PM curfew guidelines in demand for speedy justice and accountability. Law enforcement resorted to using tear gas to deter the crowds from pushing East, with constant helicopter surveillance underway.
The buildings that were set ablaze las night include a furniture supply store, an automotive repair business, and a Department of Corrections field office. A dump truck was also set on fire.

Commenting on the series of unfortunate events that have transpired in America for a long time now, Blake’s attorney and civil rights activist Ben Crump commented, “If we don’t have the systematic reform that this moment in America is crying out for, then we are going to continue to see hashtag after hashtag, protest after protest, and cities burning all across America.”

Meanwhile, in an interview with CNN, Jacob Blake’s uncle Justin Blake has urged protesters to demonstrate peacefully. In a heartfelt comment about the sorry state of African-Americans in the country, he went on to say, “This is like, all the black parents talk about that phone call you don’t want to get. And we got it. So you have to sort of be strong for each other. Let your faith be great.”