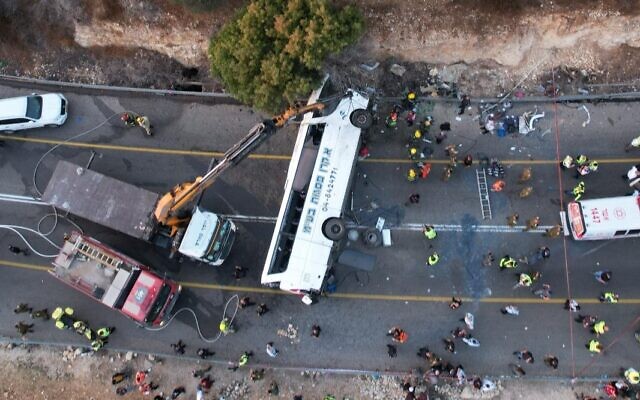 The driver who was at the wheel of the bus that crashed and caused 5 deaths and 62 injuries in Northern Israel this week was found to have a whopping 51 traffic violations.

Asher Basson, 76, who was one of the five people killed in the crash, had deviated from his lane prior to the crash and collided with the guardrail. The bus, on which dozens of children were returning from a Bnei Akiva Sukkos trip, then hit three other vehicles, including a taxi, killing four members of the Ben Eli family. The bus then overturned, crushing Basson underneath.

After further investigation of the horrific incident, Israeli officials found that Basson had a slew of traffic violations, making him an extremely rash and unsafe driver. The tragic crash severely affected the children onboard.

As per reports, the crash occurred after the bus swerved from its lane for an unknown reason and hit the side of a van. It then hit another vehicle before colliding head-on with the taxi that was carrying the Ben-Eli family. The bus tipped over on its side, causing a roadblock that lasted for hours.

According to Ynet news, Bnei Akiva counselor Dvir Neria, 18, said that the driver had been angry about the noise caused by the teenagers, asking several times for quiet and occasionally accelerating or slowing down suddenly to shut them up. When asked whether Basson was trying to send messages to the passengers using his driving, Neria said: “Yes.”