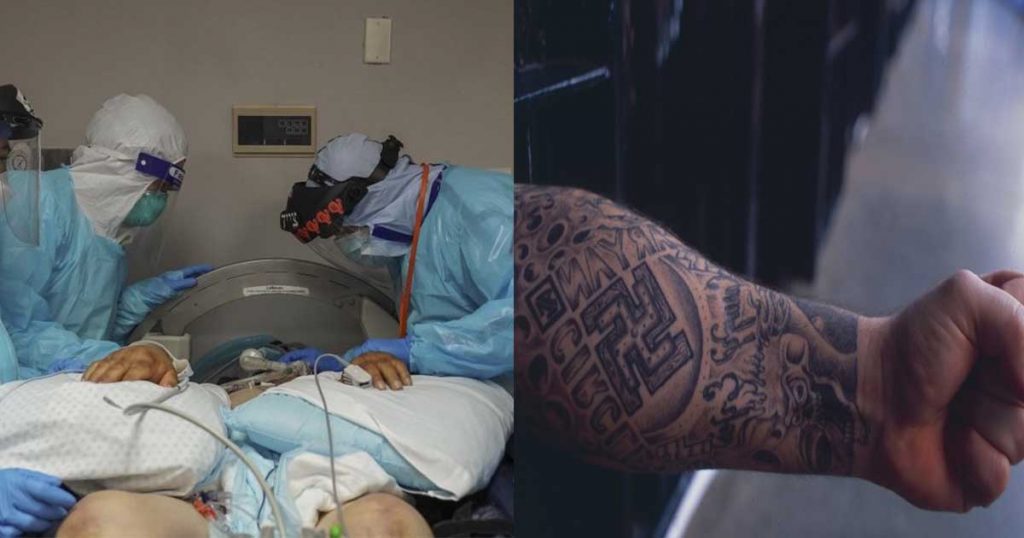 Pained at the blatant and open anti-semitic behavior that is still displayed in today’s day and age, Dr. Taylor Nichols of Jewish descent shared his experience with ABC, narrating how, as he worked towards treatise coronavirus patients, he came across a severely ill patient who sported New-Nazi tattoos.

A practitioner doctor in California, Nichols took to Twitter to share an incident that rattled him to the core. Earlier this week, as his team, which included a Black Nurse and a respiratory specialist of Asian descent, prepared a severely ill coronavirus patient to be intubated, he saw something that left him unsettled.

Taking to Twitter, Nichols posted, “The swastika stood out boldly on his chest. SS tattoos and other insignia that had previously been covered by his shirt were now obvious to the room.”

Speaking to several media outlets after the Tweet garnered widespread attention and empathetic views, Nicholas stated, “We all saw. The symbols of hate on his body outwardly and proudly announced his views. We all knew what he thought of us. How he valued our lives.” Narrating his experience further, the doctor said the man — whom he described as older and heavyset, his teeth lost to years of methamphetamine abuse, had begged him to save his life.

After the man pleaded with Nichols to save his life, Nichols reassured him that all the doctors on board were going to work hard to take care of him and keep him alive as best as they could. While saying so, Nichols claimed that he had asked himself how the man might have acted had the roles been reversed, wary of whether the man would have shown him the same compassion despite hurting his sentiments.

Nichols later told the San Francisco Chronicle that when he saw the hate symbols tattooed on the man’s body, “I didn’t feel compassion for him at that moment.”He then told ABC News he wondered “how much he would have cared about my life if the roles were reversed.” It “really made me double down and look into myself and extend that compassion towards him.”

It was unbeknownst to him whether the patient was dead or alive, but, whilst speaking to reporters, Nichols maintained that no matter what racist jabs were thrown or symbols were shown, as a doctor, and a compassionate human being, he had always done everything he could to save a patient’s life.