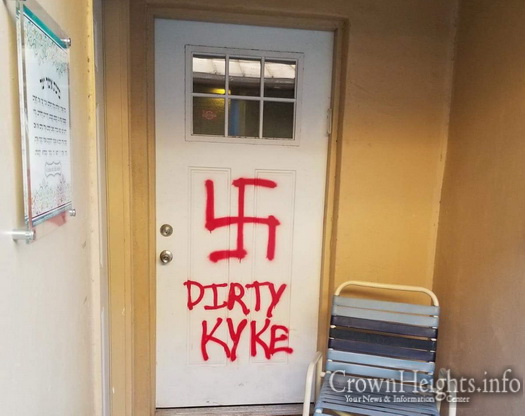 In the second incident faced by the Jewish community in Tuscon, Arizona, a Chabad House was vandalized overnight on Sunday with a swastika and anti-Jewish writing. Less than a month ago, someone threw a rock through a glass door at Congregation Chaverim, which is another Tuscon synagogue.

According to a local media report, this hasn’t been the first troublesome incident for the institution. The Chabad on River has been broken into several times; however, this was the first time it was vandalized. The synagogue is one of several Chabad centers in Southern Arizona and under the direction of Rabbi Yossie Shemtov, executive director of Chabad Lubavitch of Tucson, who stated: “We are determined not to be affected by this distressing incident and will continue serving the wider community.”

“We are very disturbed about the incident and are working closely with the police to find the party responsible,” said Rabbi Rami Bigelman, director of Chabad on River, wrote on Facebook.

In response to the incident, Arizona Gov. Doug Ducey issued a statement saying, “Sadly, this isn’t an isolated event. We see anti-Semitism on the rise around the globe, including in our own state,” said the governor. “This is wrong. Arizona stands with the Jewish community and with Israel. The lessons of the Holocaust are clear—racial intolerance and religious bigotry have no place in our society.”