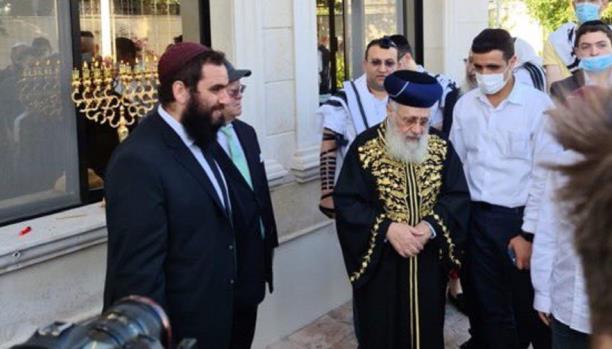 In his first historic visit to the United Arab Emirates after the normalization of ties between the two countries, Israel’s Chief Sephardi Rabbi Yitzhak Yosef certified all Jewish institutions in the Arab country, inaugurated the first certified Jewish school in the Gulf states, and invested Rabbi Levi Duchman as rabbi of the Emirati Jewish community.

Rabbi Yitzhak Yosef gave his Orthodox certification to the Jewish community center in the UAE, a synagogue in Abu Dhabi, and other Jewish institutions- marking the beginning of a new era of religious Jewish life in the Arab country. “The survival of a Jewish community depends on its adherence to Torah values and Torah learning,” Yosef told the approximately 80 community members in attendance. In the symbolic ceremony, rabbi Yitzhak Yosef helped the Dubai center start writing a Torah scroll on Saturday night. The ceremony included special prayers in Hebrew, English, and Arabic, while Yosef also expressed his appreciation for the UAE government.

Talking about Rabbi Levi Duchman, who will serve as rabbi of the Emirati Jewish community, he said, “The Jewish community in the Emirates is fortunate to have a rabbi that not only teaches Torah but is working to grow the community and its institutions.”

During his visit, the chief Rabbi also inspected the production of local kosher poultry, toured the new KAF kosher restaurant in the Burj Khalifa, and visited community institutions, including the newly dedicated nursery school. Going forward, various other aspects of the Jewish community, including the Chevra Kadisha and Mikvah are now being planned in the country, under the guidance of the Rabbi.

He also met with Emirati officials to discuss the growing ties between the two peoples and ways to continue to promote mutual understanding between Jews and Muslims across the region.

Before making the visit, Duchman, rabbi of the JCC said, “The visit of the Chief Rabbi is as historic as it is a great honor for us to host him here in the Emirates. We are excited to welcome him as we dedicate and break ground on several of our new institutions, which are being constructed with the swiftness and efficiency for which the UAE has become world-famous.”

“This historic visit epitomizes the historic achievements of the past months. With gratitude to Crown Prince, His Highness Sheikh Mohammed bin Zayed, we are now able to celebrate a new era of cooperation in the region, and we are setting out to ensure that Jews who come to work or visit in Dubai, Abu Dhabi, and across the Emirates, will have access to Jewish institutions and services,” said community spokesperson Daniel Seal.