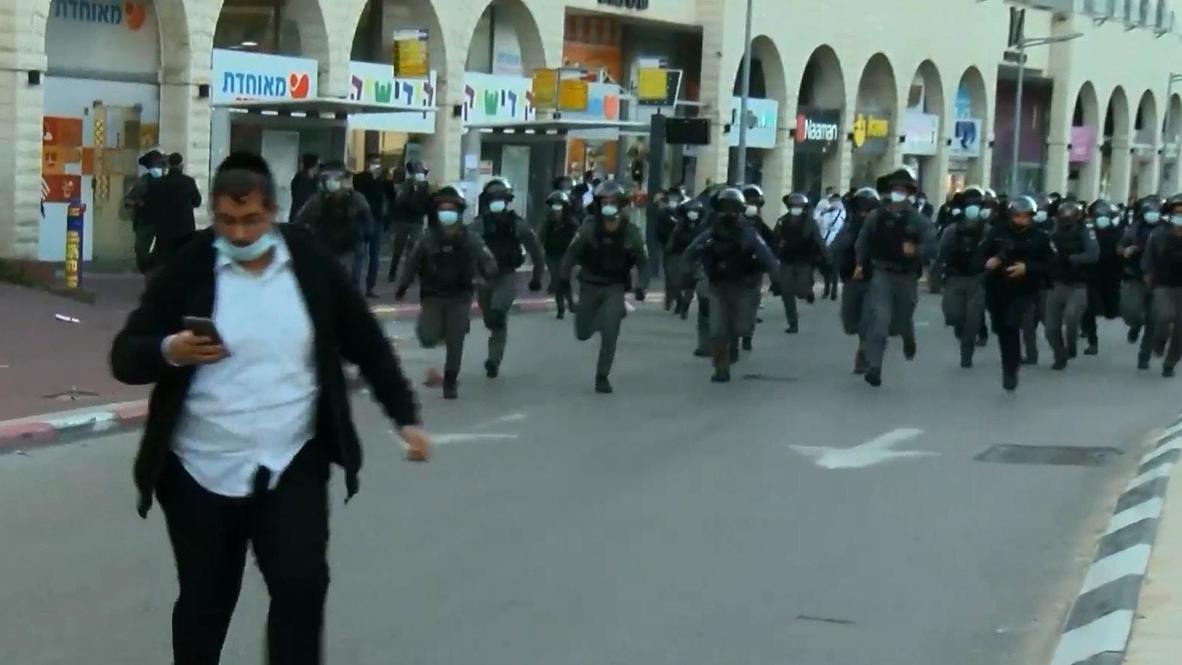 A day after clashes between the police and the ultra-orthodox community in Israel who protested against the lockdown restrictions, police on Monday, used stun grenades to clear rioters from the streets of Bnei Brak after a group attacked two buses, setting one on fire and completely destroying it.

In the latest violence, an angry mob pulled out an Arab driver from the bus, after which the vehicle was completely gutted before firefighters could reach the scene. The flames burning through nearby electric cables caused a blackout in parts of the ultra-Orthodox city located near Tel Aviv. Several residents of nearby buildings were evacuated amid fears that the bus could explode.

According to reports by local media, demonstrators also pushed dumpsters into the street and lit them ablaze, with one video showing officers being targeted with fireworks. Police said they would not be deterred by violence and vowed to continue to enforce the national coronavirus lockdown.

The latest clashes came after lawmakers from the United Torah Judaism party and other Haredi officials held a meeting on the roof of the Bnei Brak city hall, placing the blame for the ongoing violence squarely on cops and not the protesters. “The Israel Police carries the blame for the catastrophe taking place in our city for several days,” said Bnei Brak Mayor Abraham Rubinstein. He accused police of engaging in “provocative activity” and “collective punishment” against the city’s residents and called on them to leave the city.

Earlier on Sunday, a policeman shot in the air after rioters surrounded and shoved him and other cops while enforcing lockdown rules in Bnei Brak. The incident took place amid clashes in at least three cities across Israel as police attempted to enforce coronavirus lockdown restrictions. Police said the officer felt a “stab” in the back with a blunt object and therefore fired shots in the air to drive the protesters back. A police statement said a cop suffered head injuries during the clashes and received medical care. “We will work to locate and fully bring the lawbreakers to justice,” police said.

Reacting to the police handling, Yaakov Litzman said the resort to the use of guns was unacceptable. “Next, the defense minister will be calling in the air force,” he charged.

Meanwhile, in Israel, Cabinet ministers on Sunday approved the near-complete shuttering of Ben Gurion Airport until the end of January, amid fears over fast-spreading or vaccine-resistant coronavirus variants entering the country. The closure will start from midnight Monday-Tuesday and remain in effect until Sunday, January 31, when national lockdown measures are set to be eased.