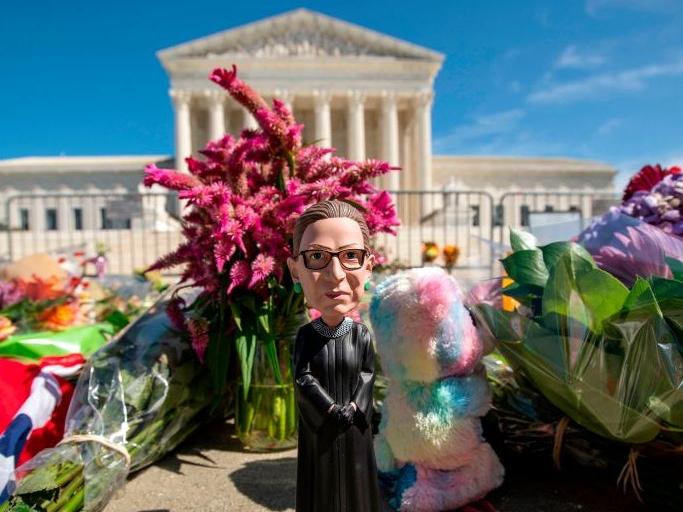 Commemorating the Death Of Legendary Judge Ruth Bader Ginsburg, President Trump To Nominate A Woman To The Supreme Court

As the world grieved the loss of one of the most trailblazing gender parity warriors, Ruth Bader Ginsburg, President Donald Trump said Saturday he will nominate a woman to the Supreme Court this week and that she should be confirmed as soon as possible.

Looking for a deserving successor for Justice Ruth Bader Ginsberg, one of the country’s forerunning and revolutionary gender parity and liberal justices, President Trump in a rally at Fayetteville, North Carolina on Saturday, said “I will be putting forth a nominee next week – it will be a woman.”

Losing her battle to a recurring pancreatic cancer, the legendary associate justice breathed her final breaths on Friday, 18th September 2020. Democrats and Republicans reacted to news of her death with grief even as they drew battle lines over the possibility of finding a replacement justice before the elections.

At the event in North Carolina, when President Trump told supporters “we’re going to fill the seat,” the crowd responded with repeated chants of “fill that seat! fill that seat!” – just 24 hours after the announcement of Ginsburg’s death. Shutting down statements made by Sen. Susan Collins, R-Maine, that the winner of the presidential election should pick the next justice. The President said, “We have an obligation. We won. And we have an obligation as the winners to pick who we want.”

During the rally, Trump praised Ginsburg as “an inspiration,” and claimed that her seat will be filled in by a rightful candidate, soon enough- prompting more chants by the audience, in support of the President. Vouching for quick progress regarding the selection and appointment of the judge, it has been speculated that the two names, one of whom might make the cut, include Appeals court judges Amy Coney Barrett and Barbara Lagoa.

Democrats, on the other hand, are condemning the decision, claiming that the death of Justice Antonin Scalia in 2016 should be cited as an example not to make a decision until after the elections. In the case of Scalia, the Republicans blocked President Barack Obama’s nominee – Merrick Garland – and argued that the winner of the presidential election should pick the new justice. Citing this as a valid example, the party has said that the same standard should apply this time around, and everyone should wait and let the winner of the November contest make the selection.