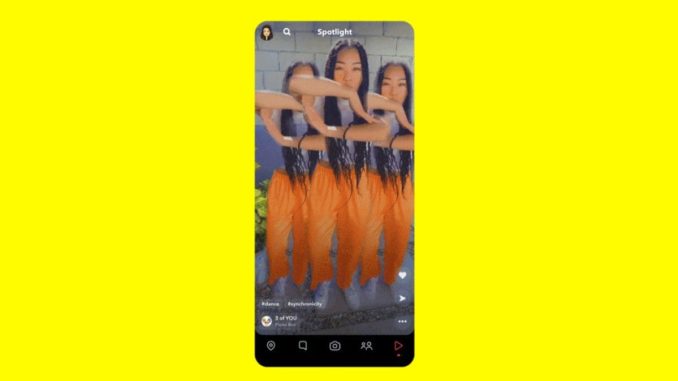 All set to jump into the short-video content market, competing with TikTok and Instagram Reels, Snapchat, on Monday, launched its ambitious new in-app video vertical titled ‘Spotlight’. For starters, in order to boost the new feature, the company has announced a $1M fund which will be divided among those who post the most popular Snaps.

Announcing Spotlight yesterday, Snapchat introduced the new feature as a vertical which will feature ‘the most entertaining Snaps from the Snapchat community all in one place.’ In a detailed statement the day of the launch, Snapchat described the in-app update as “Like our other platforms within Snapchat, Spotlight will be defined by our community — how they use it, what they create, and the stories they tell. Our hope is that Spotlight lowers the barrier to content creation. You don’t have to have a public account, just a great Snap, to be featured.”

As a means to garner more attention in its initial days the company also announced that it will distribute over $1 million USD per day to Snapchatters who make the most entertaining Spotlight Snaps. “You don’t have to be a celebrity, influencer, or public figure to earn. We want to make Spotlight fair and fun,” the company stated.

Snapchat, in its announcement also added, “Spotlight is built in a Snappy way, which upholds our values around privacy and prioritizes the well-being of our community: it’s moderated, it doesn’t feature public comments, and profiles are private by default. We’ve always built product features in a way that aims to best serve our community, from making messaging ephemeral to rethinking social sharing with chronological Stories, to building a personalized rather than geographic Map experience. We’re sure to learn so much from how our community as we continue to evolve Spotlight and see what resonates, but today is the first step!”

The video lengths are currently capped at 60-seconds, while all profiles will be private by default. Spotlight snaps won’t feature a public comments section, and Snapchatters can keep their accounts locked down while still posting content. As of now, the app will be launching in 11 countries, including the US, UK, France, Germany, and Australia, and more countries will follow soon.