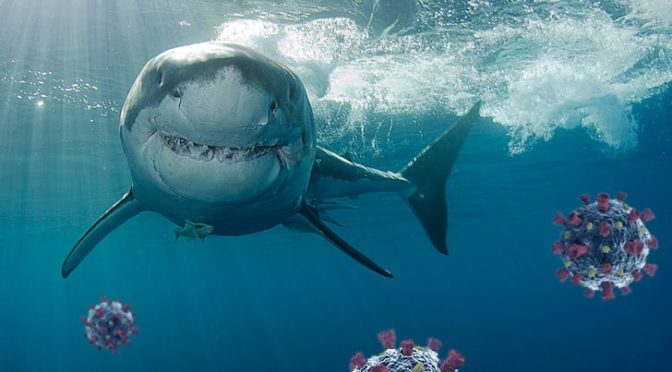 Conservationists Warn Wipeout of Half a Million Sharks For COVID Vaccine

Environmental activists have sounded a warning claiming that around half a million sharks would be wiped out from the planet, as at least five of the COVID-19 vaccines that are currently under development contain “squalene”- a natural component that is currently commercially manufactured from sharks.

As reported by Sky News the one prominent oil that is being widely used in some coronavirus vaccine candidates is a natural ingredient extracted from shark livers. The ingredient Squalene is currently used as an adjuvant in medicine, that is- an ingredient that increases the effectiveness of a vaccine by creating a stronger immune response.

Going by this requirement, if one of these vaccines ends up being produced globally and every person on the planet receives two doses, more than half a million sharks would be killed, according to Shark Allies, a California-based advocacy group. In a report by Shark Allies, the group voiced major concerns over the endangerment of this oceanic species saying, “If the world’s population received one dose of a coronavirus vaccine containing the liver oil, around 250,000 sharks would need to be slaughtered, depending on the amount of squalene used.”

Harboring the potential to endanger an entire species for years to come, the group of conservationists has urged pharmaceuticals to carry out intensive research on alternative sources of Squalene from plants like sugarcane.

Shark Allies has already claimed that an estimated 2.7-3 million sharks are killed every year just for their squalene. According to the group, the five vaccines that contain shark squalene are being developed by GSK, Clover Biopharmaceuticals, Seqirus/University of Queensland/CSL, Medicago Inc., and Farmacologós veterinarios SAC/Universidad Peruana Cayetana Heredia.

“Harvesting something from a wild animal is never going to be sustainable, especially if it’s a top predator that doesn’t reproduce in huge numbers,” Stefanie Brendl, founder and executive director of Shark Allies said. Brendl also added, “There are so many unknowns of how big and how long this pandemic might go on, and then how many versions of it we have to go through, that if we continue using sharks, the numbers of sharks taken for this product could be really high, year after year after year.”

“Many of the species targeted for being rich in squalene, such as the gulper shark and the basking shark, are classed as vulnerable, meaning that their populations are decreasing and they could become endangered if the circumstances threatening them continue”, she said in an interview with The Telegraph.